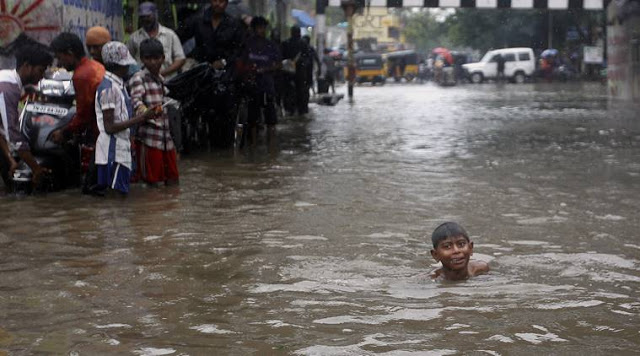 Residents of the city are facing deep trouble as sewage water mixed with rain water is logged up to a couple of feet around various parts of the city. Chennai, with a population of about 6 million people experienced a severe downpour of 345 mm in 24 hours.

While it is not a hard task to tag the situation as a natural disaster, experts opine that it indeed is a man-made disaster due to “encroachment” by temporary developers in the name of urban planning and development. The Chennai Municipal Authority has reported that there are 150,000 and more illegal buildings built in and around the city despite court order for demolition.

In 2005, a similar flood had occurred in Mumbai and one in Srinagar in 2014. In Chennai, storm water channels were blocked by construction and so was the capacity of reservoirs reduced instead of soaking up untimely rains.

The scenario in the airport also reveals an unplanned infrastructure that holds no good during such emergency circumstances. Experts reveal that the status of the development of the infrastructure had not been checked in 15 years.

The death toll of the above natural disaster has gone up to 270 leaving about 1000 others injured severely.

Restoring the drainage system that was there earlier is indeed a better idea. It is the first and foremost task that has to be carried out in the near future according to suggestions by experts as well as common people.

Although the city was highly ambitious in getting for itself a better drain, cleaner water way and newer pumping stations, reaching the goals has been an issue. The projects remain almost 10 years behind the expected dates.

According to Bhartiya’s pathak, it is more important to build a city to ensure its self-sufficiency in fighting such disasters rather than aiming at converting it into a ‘smart’ city. He added “The top Chinese megacities, where most growth has happened, are city states, so would India consider city-state status, or sub-state status, for Chennai, Hyderabad, Bengaluru, Mumbai, Kolkata, Ahmedabad and Pune?”