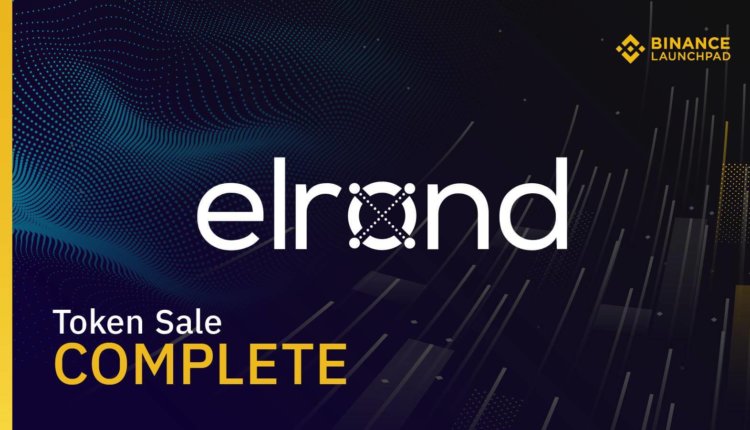 Binance Launchpad – the token launch platform for transformative blockchain projects of a global cryptocurrency exchange has finally conducted its sixth IEO- Initial Exchange Offering sale in the form of lottery, the Elrond Network will be trading on its Binance.com.

The token sale of the Elrond Network followed the same lottery format that was followed by the Harmony and Matic Network IEO’s. And the Binance Launchpad revealed that there are around 10,833 winning tickets that are held by 10,496 users and the winner would be receiving 461,528.46 Elrond coins.

What is Elrond Network

Elrond Network is a high-throughput blockchain focused towards the scalability, efficiency, and interoperability. Elrond Network is planning to achieve this with the help of Adaptive State Sharding and a new Secure Proof of Stake consensus mechanism. Elrond, along with the other companies, is trying to push the boundaries to apply the sharding on public blockchains, which would help in increasing their throughput capacity.

Elrond Network Vs. Other Related Project

There are other projects like Dfinity, High-Performance Blockchain, and Seele addressing similar issues. Although there exist similar projects and scalability is one the crucial issue in blockchain technology.

Elrond is too entering into most competitive space of blockchain – Scaling.  The industry is already filled with project like Cardano, EOS, and Zilliqa. The most comparable project with Elrond network is Zilliqa and Harmony.

Zilliqa raised $22 Mn USD in 2018 for 30% of the total token supply. The token was launched at 15X on listing day and raised to billion dollar company within a short period. Considering this scenario. Harmony protocol is more powerful, has a solid roadmap and a team.

Harmony Protocol is raised $5 Mn USD 12.5% of Total Token Supply and the current market capitalisation of Harmony is 39 MN, which is ~8X from the IEO price. We are considering the current market condition to be good. Elrond can easily do 7X -10 on the listing. Good for a flip.

A very high chance that within a few Months, Elrond will do 15X considering the project and competitors market. In the long run (1 Year), the project has a very high chance to do 40X to 50X and will reach around the $200Mn market cap. Provided that the project completes the task laid in the roadmap and can attract the developer community.

Binance launchpad was started in 2018 and then kicked off again in 2019. So far binance has conduct 5 IEO and Elrond network will be the Sixth IEO.

BitTorrent, Fetch, Celer and Matic. All these IEO on the listing day has performed around 4X except Matic at 2X (due to adverse market condition, As alt were dropping while BTC was pumping).

While Matic and BitTorrent are currently trading Above 5X, considering the Binance based IEO, a very high chance the Elrond will be listed around 6X. and would perform better.

Missed IEO? What are the chance to make a profit on Exchange Buy

Conclusion: Elrond is an excellent project for a flip and long term.

P.S: Note that these price predictions are based on some data, which we collect from various sources and internal research. Price prediction may differ, and we request our reader that not to be dependent on this solely.

Bitcoin Cash Can Be Traded Directly Through The Switzerland Stock Exchange