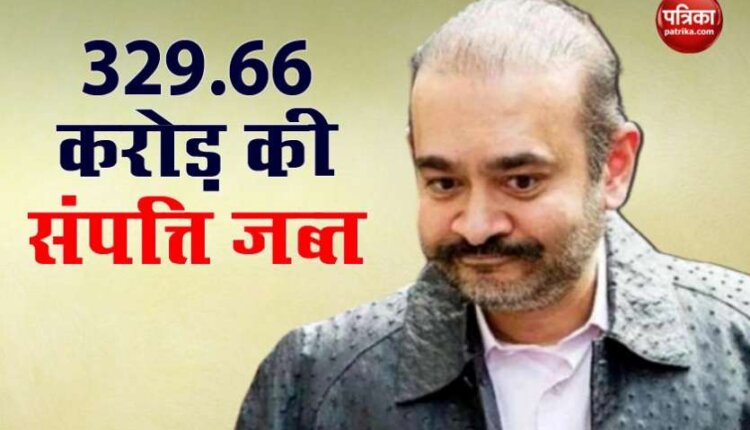 new Delhi: In a major action against fugitive diamond trader Nirav Modi (NIRAV MODI), the Enforcement Directorate has seized his assets worth 329.66 crore. Modi’s seized assets include four flats in Samudra Mahal Building in Worli, Mumbai, land in Alibag (NIRAV MODI ALIBAGH BUNGLOW) and a farmhouse near the sea, a windmill in Jaisalmer, flats in London and in the United Arab Emirates (UAE) Residential flats are included. Apart from this, Modi’s bank deposits and shares have also been seized by the ED.

In June, the court gave orders to seize the property- Let us tell you that in June, the Mumbai High Court ordered the seizure of Nirav Modi’s property worth Rs 1396 crore.

Let us tell you that earlier in March, ED had collected Rs 51 crore by auctioning expensive watches, paintings, cars of Nirav.

Diamond trader Nirav Modi and Mehul Choksi are the main accused in a scam involving the Punjab National Bank of about Rs 14,000 crore. The CBI and ED are investigating the case after the PNB scam was exposed in January 2018.

Under Ujjwala scheme, LPG Cylinder will be available for free for the next year, the government will continue support in EPF

Nirav Modi is in jail in London (NIRAV MODI IN UK JAIL) – Nirav Modi (NIRAV MODI PNB SCAM) is undergoing extradition law in UK (NIRAV MODI EXTRADITION CASE) in the scam case with Punjab National Bank. A hearing in this case is scheduled on September 7. London police have arrested NIRAV MODI ARRESTED after the extradition charges were issued in March on India’s appeal in debt scam and money laundering cases.

Ayushman Bharat Scheme: Under this scheme, there is free treatment in the hospital, check your name like this