Dutch Safety Board to Release its Report on MH 17 Crash 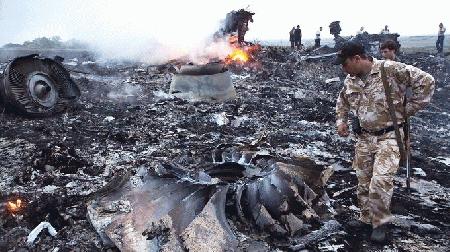 The Dutch Safety Board on Tuesday will unveil the report that states the reason behind the crashing of Malaysian Airlines Flight MH 17 on July 17, 2014, that killed 298 people on board. The findings from the report will be initially shared with the families of the deceased, and later, these details will be presented in the Dutch military base located in Gilze-Rijen, Netherlands.

The Dutch Safety Board would probably exhibit the reconstructed debris of the plane recovered from the crash site in Donetsk, before the family members of the people who were travelling on that flight.
The speculated reason behind the crashing of the Malaysian Airlines plane, which was flying from Amsterdam to Kuala Lumpur, is the Russian-made Buk Missile that hit the MH 17.

However, it is yet not understandable as to who fired it. A few experts and some staff members from the West claim that it was shot by the rebels in the eastern Ukraine by thinking it to be a military plane from Ukraine.

As per the preliminary findings, a “high-energy object from outside the aircraft” had hit the Malaysian airline flight.

In its report, the Dutch Safety Board will apparently provide an answer for the reason behind the MH 17 crash, whether the travellers were aware of this mid-air, any panic among the passengers, why did the plane fly above the conflict area and why did the family of the passengers had to wait for nearly four days to get the official confirmation that their relatives were on the plane or not.

Other queries also related to the MH 17 crash will also be answered after the report is released. Though the report would not clearly state the people responsible for this unfortunate happening, it would certainly clarify the reason behind their death. As revealed by the BBC, Almaz-Antey, Buk missile maker from Russia, will also disclose his report on this enquiry separately.