Do not make these 5 mistakes while filling the check, it can be a big loss 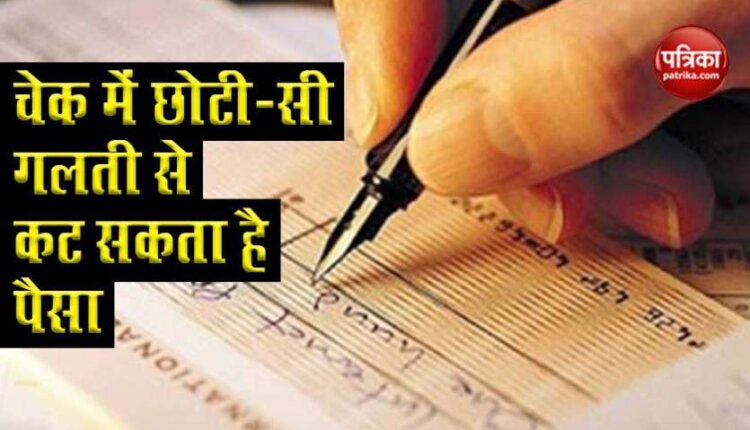 new Delhi. Often people make a lot of mistakes while filling a check (fill the check) in haste or if they do not pay attention properly. Such as over writing, frequent cutting or use of two colored pens, etc. It seems like a very small thing to see, but such mistakes can put you at a huge disadvantage. With this the bank can impose a penalty on you. Also can suspend the account. So let us know what mistakes should be avoided while filling the check.

1. Do Over Writing
Often people make the mistake of overwriting in a check. This is a common mistake, but according to the rules of the bank it is not considered fair. This makes the account holder suspicious. Generally people make these mistakes while writing names or signing. This makes the bank feel that you are not withdrawing money in a fake way. So avoid doing this.

2. Do not use two colored pens
Many times, while filling the check, if a pen refills or the pen does not run properly, we write with the other pen in the same check. You may have used the same blue pen both times, but the ink of the pen causes a difference of color. This also puts you in doubt. This makes it difficult to verify your check in the bank’s system.

4. Do not make mistake in filling the amount
Many times, the amount of money that the customer pays while withdrawing the check is not in the account. Due to this, the check bounces. Due to which different banks have their own rules of penalty. So while filling the check, the details should be filled correctly. Make sure to check the balance before entering the amount.

5. Do not disturb signature
A person’s signature is most important when withdrawing money from a check. Because from this, the person who withdraws money is identified. But many times the account holders forget their sign after withdrawing money in haste or after many days. Due to which his signature is not found. Due to which they find it difficult to withdraw money. So keep your signature in a diary and keep it safe. So that you keep in mind how you signed.

Gas Cylinder will be booked through WhatsApp, know what is the process, in which cities it started