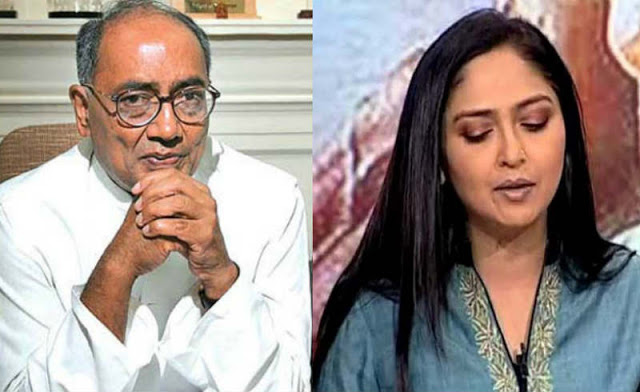 Digvijay Singh General Secretary of Indian National Congress and Amrita Rai TV journalist are married?. According to the news published in the Indian Express Digvijay and Amrita Rai got married in Chennai last month. Last year their private photos were leaked and had gone viral on social media.

Former chief minister of Madhya Pradesh and senior Congress leader Digvijay is now in US. According to sources Digvijays’ close relatives have confirmed their wedding. Amrita Rai, Journalist in the Rajya Sabha has not made any statement about it. Sunday Express Staff of RajyaSabha told Amrita is on vacation.

In 2014, soon after the leak of private photos, Digvijay confessed his relationship with 44-year old Amrita. He wrote on Twitter: ‘Amrita and her husband have filed a petitioned in the courts for divorce by mutual consent’. As soon as the verdict comes on this petition, we will give formal name to our relationship. ‘ Then Amrita Rai also confirmed on Twitter, and wrote, ‘I am estranged from my husband and we have filed petitioned for divorce by mutual consent. After that, I decided to marry Digvijay Singh. ”

While the news is getting viral on Twitter: see some of the tweets

Digvijaya Singh marries Amrita Rai, shame on all you single people (including me) out there. 😉

Just got the news : Diggi got married once again… No congratulations tweets?? Why people? Badhaiyaan to banti hai ! Congo @digvijaya_28