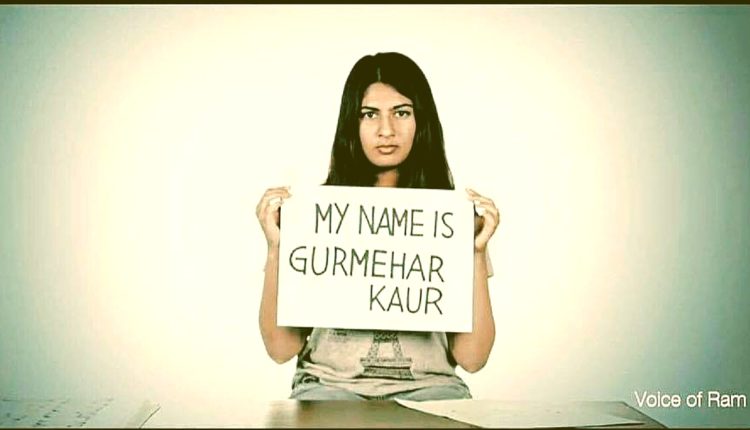 With abundant perspectives on the Gurmehar Kaur’s gutsy step, it took a while to bifurcate the section of people criticising and appreciating her. Not easy in existing circumstances where on one side we are combating the slow yet steady rise of communalism and at the other end, there is invisible and visible segment of people hounding to judge your statements. Cricket icon Virender Sehwag and actor Randeep Hooda faced the ire of numerous personalities for being cynical on this issue.

Gurmehar is a common girl who voiced protest ‘Save DU Campaign’ against the ABVP for creating commotion at Ramjas College in Delhi on February 22 as JNU students Umar Khalid and Shehla Rashid were supposed to attend a seminar. Kaur had uploaded an image on the Facebook page which stated: “I am a student from Delhi University. I am not afraid of ABVP. I am not alone. Every student of India is with me. #StudentsAgainstABVP”.

Her opinion was misguided by digging out a video which is a part of #ProfileForPeace campaign posted in 2016. As her father Captain Mandeep Singh was martyred during a war with Pakistan, in the video, one of the placards read: “Pakistan didn’t kill my father but the war did.” While she tried to advocate peaceful relations with the neighbouring country, the video was brought into the limelight in wrong time.

The statement was enough to ignite the issue politically. Apart from garnering enormous support from students and her college, Lady Shri Ram College for Women, for her right of free speech, Kaur was trolled on Twitter, received rape and life threats and was tagged as anti-national. The association of two things said at different times to highlight an issue was unfortunate. Later, Kaur was compelled by the circumstances and threats to withdraw from the campaign.

It isn’t wrong to express an opinion but being judgmental on an issue is incorrect. One video from her past made people overshadow her DU campaign. Where and how did the freedom of speech vanish in her case? Was it because she said Pakistan didn’t kill her father?

Whether right or wrong, an opinion must be given liberty. And if there is anything wrong, then it can be objected but not in the disguise of threats. With due respect to her outlook, I don’t agree with her above statement.

Pakistan has always fueled the situations of war. There have been cases of infringement by Pakistan near the LoC various times that has killed and injured our country’s soldiers. The terrorists from Pakistan have attacked the base camps of our army which martyred many soldiers. What about the Pathankot attack? How can we forget that? Now, please tell who is to be blamed: war or Pakistan? Still, our country endeavoured to pacify relations with Pakistan which has always tried to intrude in our country.

For those nationalists, who are threatening Kaur for expressing her opinion, where do they vanish when our leaders in the name of politics cross their limits to target each other? Why are questions not raised when they manipulate opposition to entice people for votes?

Where are the pinpointers who ignore the speeches of leaders trying to create communal division by raising slogans related to temples and mosques? Why such statements are overlooked and opinions are not uttered against the leaders polluting the mind of the public?

When movies are made to highlight issues (like Udta Punjab) or talk about gender equality (like Lipstick Under My Burkha), they are either scrapped, censored or denied certification. Most of the time, the functioning of Lok Sabha and Rajya Sabha are hindered because of clashing viewpoint between our leaders. The bills fail to pass but the blame games persist. Why don’t the student bodies protest in that case?

They should be held responsible for raising such statement but that’s absolutely not happening as it is a case of free speech and our country is a democratic one. Leaders have the right to express their view, then why not public?

There are various concerns and the ones stated above are just a part of it. Kaur’s case has highlighted this alarming concern. We really need to think about it. Such partial reactions raise questions on the boundaries of free speech set for the common man of a democratic country set by the people of a democratic country.

PS: The perspective is a part of free speech right.