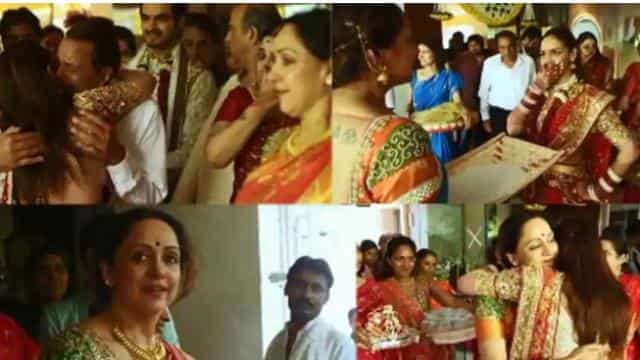 Actress Esha Deol has shared a video of her farewell on social media. In this, Hema Malini and Dharmendra are seen leaving them after marriage. Let us tell you that Isha Deol is married to businessman Bharat Takhtani.

In the video, you will see Isha Deol standing in front of sister Ahana Deol. During the farewell, the girl has to drop rice backwards. Isha becomes very emotional while performing this custom and when she looks back, father Dharmendra and mother Hema Malini are seen. Isha hugs her father and Dharmendra is unable to stop his tears. At the same time, mother Hema Malini smiles, hugs and leaves him.

Isha says that I am among those who do not cry quickly. But whenever I watch this video of farewell, I get emotional. I still cry a lot today. Let me tell you that Dharmendra did not want Isha Deol to enter the Bollywood industry. He was strongly against it.

Hema Malini told that Isha loved to do many things. She specializes in sports and dance. Like I used to talk about my home, we used to practice a lot of dance, due to which Isha started to like dance too. Isha wanted to become a professional dancer and started her Bollywood career in that. However, Dharam ji did not like to dance his daughter. He was strongly against this and used to say that Isha cannot make a Bollywood debut like this. He also raised many questions about this matter.