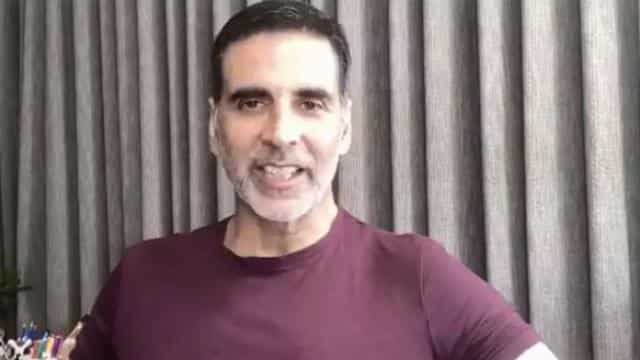 Cyclone Nisarg will hit the coast of Maharashtra on Wednesday. In view of the devastation, a red alert has been issued in Mumbai and Gujarat. The Meteorological Department said that it could take serious form. The government has appealed to the people to stay indoors. Meanwhile, heavy rains have also started in Maharashtra since late in the evening. At the same time, Bollywood celebs are also releasing videos asking people to be cautious. Recently, Akshay Kumar has shared a video related to Hurricane Nisarg.

Akshay Kumar has shared the video on Twitter and wrote that the rain has knocked in Mumbai and came with Hurricane Nisarg who is a uninvited guest. If it comes to us then what precautions we need to take listen through this video. BMC has prepared a list, which has written all the precautions. May all people be safe.

The much-awaited Mumbai rains are here but this year we have an uninvited guest, #CycloneNisarga! In case it does hit us, here are some precautions shared by @mybmc, we will get through this as well. Praying for everyone’s well-being 🙏🏻 pic.twitter.com/M1nlPUW4ua

Let us tell you that the chemical and nuclear plant at Palghar and Raigad has also been threatened by this storm. Precautions are being taken to protect them. Palghar has the oldest Tarapur atomic power plant in the country. At the same time, 40 thousand people were evacuated from the coastal areas of Gujarat and Maharashtra to safe places. People in Maharashtra have been prevented from going to the coastal areas.

Video: Akshay Kumar encourages people to return to work, tips given to be careful with corona virus

At the same time, Akshay Kumar recently shot an advertisement for the government. It has been released. In this advertisement, Akshay has given many ways to caution those returning to work with the corona virus. This video has been shared on the official Twitter handle of the Press Information Bureau.

In this ad video, Akshay Kumar played the role of a person named Bablu. The video shows Bablu going to work wearing a face mask. The sarpanch of the village tells him, he went out for a walk as soon as the lockdown opened. The epidemic is still widespread. Bablu says that Sarpanch ji is not going for a walk, going back to work.