Coronavirus breaks thousands of crores of losses from Airlines industry, from Indigo to SpiceJet 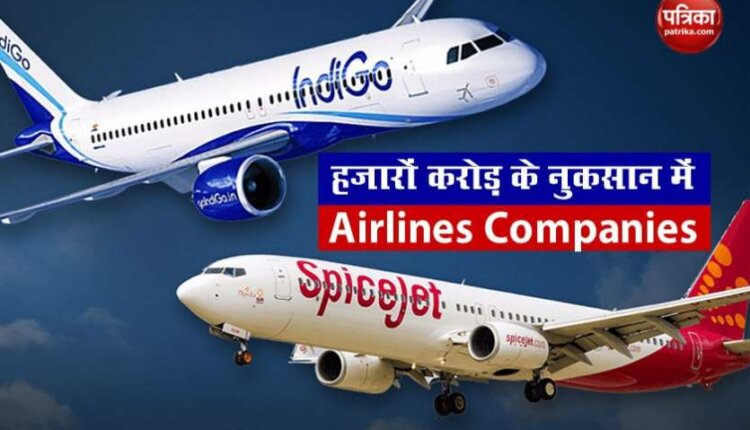 new Delhi : Coronavirus ( coronavirus ) Because of the condition of every sector of the economy is bad, but if it is said that it has had the most dangerous effect on the aviation industry, then it will not be wrong. Due to the continuous cancellation of flights for 2 months, the airline companies are unable to bear their expenses. Due to this, Air India, SpiceJet ( SpiceJet ), Indigo ( indigo ) Companies are working on the option ranging from employee salary cuts to layoffs due to continuous cost-cutting.

Indigo suffered a setback in the June quarter
Indigo’s parent company Interglobe aviation, while presenting the June quarter report on Wednesday, reported a loss of 2844.3 million. The company had a profit of 1203.1 crore in the same quarter last year.
Actually, due to the government order, the operations of the company were badly affected, due to which the income from the operation has come down by 91.9 percent.

So on the other side SpiceJet Airlines While presenting its report, it has reported a loss of 807.1 crores in this quarter while the company had a profit of 56.3 crores in the same quarter last year. This loss also includes non-cash loss of Rs 473.4 crore of the company.

Speed ​​gift of Indian Railways, will accelerate the production of 18 out of 44 new Vande Bharat Train

Spicejet has also suffered significant losses due to grounding of Boeing 737 MAX aircraft in addition to Kovid-19. The company in its report has cited these 2 reasons as the main reason for the loss. The company says that despite the grounding of the Boeing 737 Max, the company was benefiting but the Kovid-19 has had a very bad effect on the company’s business.

It is worth noting that on Tuesday only Indigo ( IndiGo Airlines ) Had said to cut their senior employees salaries by up to 35 per cent, saying that the company has taken this step for cash management. The company has stated in its report that they have a cash of 18449.8 crores of which 7527.6 crores free cash and 10922.2 crores of restructured cash. The company says that it is their biggest responsibility to manage cash at this time because IATA has said that before 2024 there is no scope of improvement for the aviation industry.

2000 rupees installment of PM Kisan Scheme will come on August 1, did you register?