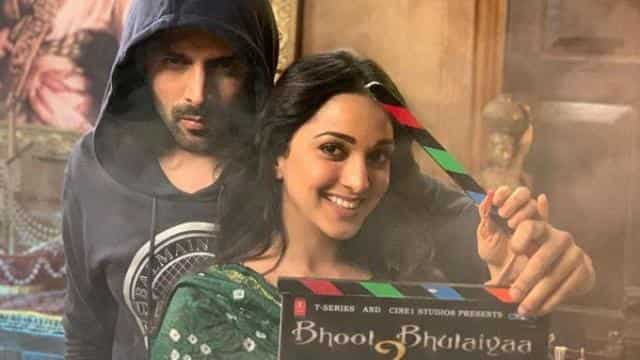 ‘Bhool Bhulaiya 2’ is directed by Anees Bazmee and produced by Bhushan Kumar. The film was scheduled to release on 31 July 2020. Currently it has become postponed due to lockdown. The film stars Kiara Advani alongside Karthik Aryan. Apart from this, Tabu will also appear in an important role in the film. A sensational news related to the film has been revealed. According to the news, the producers of the film are afraid to shoot the film.

Talking to Pinkvilla, producer of ‘Bhool Bhulaiya 2’ Murad Khaitani said that it is difficult to shoot for any recent film. According to Khaitan, there is no plan to shoot the film right now. He completed his talk saying that all the people associated with the film are in equal touch and according to everyone’s suggestion there is no question of shooting in such a scary situation. Everyone is talking about being safe first and waiting for a good time. So it is not possible to shoot in unlock.

‘Bhuj: The Pride of India’ makers take a big decision, Ajay Devgan-Sonakshi Sinha to be released on digital platform

Khaitani further said that the major part of the film is to be shot in Lucknow, in such a way, he is looking for a new way. According to him, we were shooting in Lucknow before the Corona outbreak, but it is not safe to go there again. This is the reason that we will first start shooting in Mumbai and then plan ahead, looking at the safety of all.

Shilpa said – Due to Corona, the daughter has not been taken to the courtyard yet.

Let me tell you that for the last two to three months, the Corona virus crisis is not being named throughout the country. The number of victims of this virus has crossed 6 million worldwide. The entertainment world is getting badly affected due to this virus. So far, the Bollywood industry has lost more than 1000 crores. Due to this virus, the shooting of all films is locked. However the unlocking process has started in the country and unlock-1 has been implemented by the government. At the same time, for the Bollywood and TV industry, the Maharashtra government has allowed the producers to start the shoot with some rules. But still Bollywood is afraid of taking any ricks.

For your information, let me remind you that Akshay Kumar starrer film Bhool Bhulaiya reached the silver screen in the year 2007. The film featured Vidya Balan, Shaheen Ahuja and Rajpal Yadav in the lead roles with Akshay Kumar in the lead role. The film was directed by director Priyadarshan. But this time the sequel of the film is being directed by director Anees Bazmee.