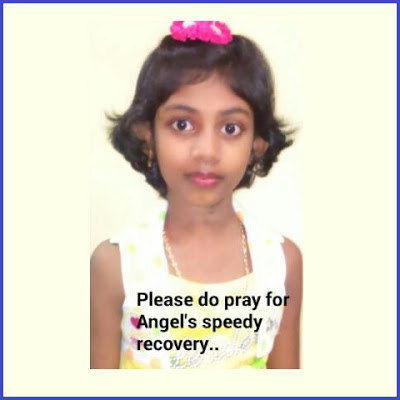 Angel, a seven year old girl, admitted in Chennai’s Mehta Hospital is undergoing treatment for the weaker immune system and needs your help. Admitted in the ICCU department of the hospital, initially, it took a time to the doctors to find out the reason behind her deteriorating health.

Angel’s mother revealed that as Angel suffered from fits frequently, she was admitted to the hospital. Initially, doctors thought it was brain infection and continued treatment for four days. Many tests were conducted in these four days to confirm the reason. However, doctors later confirmed that it wasn’t the brain infection. The doctors then performed few more tests and figured out that “her immune system is acting as an enemy”.

However, financial problems are acting as a constraint. The doctors have decided to give her two injections worth Rs 65,000 each to make her immune system healthy. Besides, there is a daily expenditure of 40,000. As Angel’s mother is a divorcee and is a teacher by profession, till now, she has managed to deposit Rs 1, 70,000 only. To help the family, Vishvaas Group has taken the initiative to help the family in collecting funds.

A group consisting of 28 members, Vishvaas was formed on July 28, 2015, to help the people in need. One of the members said, “We were discomfited after meeting Angel in the ICCU. We all met her one by one, and she is in a very critical condition. We have initiated a drive to help her.”

Being its first project, the group is endeavoring to help them as much as possible. The group has donated Rs 5,000 for Angel’s treatment.