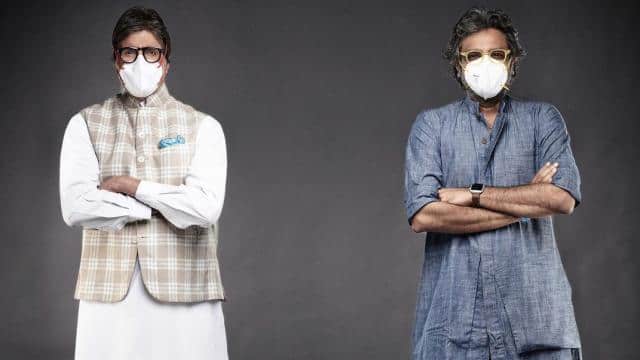 While calling anyone, you hear the message ‘Two yards away, mask is necessary’ in the voice of Amitabh Bachchan. Now a very cool photo of Amitabh Bachchan wearing a mask has also surfaced. Celebrity photographer Avinash Gowariker shared a picture on Instagram with Big B, in which Amitabh Bachchan is seen wearing a kurta and pajama and wearing a mask. He has returned to work a long time after suffering a corona virus infection. She is currently busy shooting for episodes of ‘Kaun Banega Crorepati’.

Apart from this, he is also busy in completing many of his projects. Recently a picture of him with son Abhishek Bachchan was also revealed. This photo was also shared by Avinash. That black and white photo of father and son was liked by millions. Now Avinash has shared the photo with the caption ‘Two yards, mask is necessary’. In it, he and Amitabh Bachchan are seen standing at a distance. Avinash has written in the photo caption that this photo was taken after packup. Apart from this, they have also used slogans with hashtags to avoid corona such as Keep Distance and Stay Safe.

Let me tell you that Amitabh Bachchan was last seen in the film Gulabo Sitabo. In this film, he was seen opposite Ayushmann Khurrana. His Brahmastra movie is going to come in the coming times. She is currently busy shooting for Kaun Banega Crorepati. Explain that the government has chosen Amitabh Bachchan as the brand ambassador to make people aware of Corona. Recently, Amitabh Bachchan shared a picture on social media wishing 2021 to be auspicious. In this picture 2021 was written, of which 1 was hung with lemon and chilli.

These gifts received in finance, insurance and banking in 2020, will also change from January 2021

Good news for this industry, 1 million jobs will open