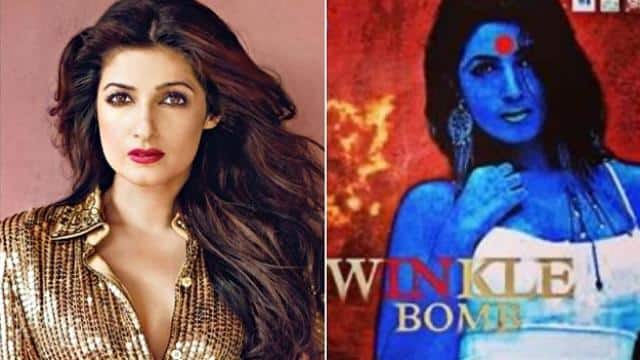 Akshay Kumar’s film Lakshmi is about to release. Explain that earlier the name of the film was Laxmi Bomb, but after the controversies, the name of the film is now just Laxmi. Meanwhile, Twinkle has shared a screenshot in which the troller has shared a photo of the actress and wrote Twinkle Bomb. Sharing this photo, Twinkle wrote, Trollarl helped me. I was looking for a photo when I got my eye on it.

Twinkle further wrote, ‘They took my photos, changed my skin to the same peacock shade as Lord Krishna, added a red dot and are sharing posters of Twinkle Bomb. To be honest, I am quite happy because it has come at the right time as a middle age woman, I felt that my days of explosion were behind. ‘

Trolls are helpful just when I was looking for the image for https://t.co/0u5IZjit7B here it is:) Crop rather than repost! One added ‘3rd class https://t.co/JSxJXpEMEL make joke about God.’I’m tempted to reply, ‘God clearly likes a good joke or she would not have made you.’ pic.twitter.com/i3cQbphQIm

Akshay could never win in a fight with Twinkle

Let us know that recently, Kapil Sharma reached the show with Kiara Advani for the promotion of ‘Lakshmi’. During this, everyone had a lot of fun. When Archana Puran Singh asked Akshay if he lives a king size life at home? So the actor says, no, I did not win the king size at all. Then Archana asks, who wins when the two of you have a fight?

Twinkle wins, says Akshay. Then Archana says, when did you realize that you can never win? Akshay immediately says, it was revealed on the night of the wedding.

Talking about the film Lakshmi, the film directed by Raghav Lawrence will be released on Disney + Hotstar on 9 November. The film stars Kiara Advani in the lead role alongside Akshay.