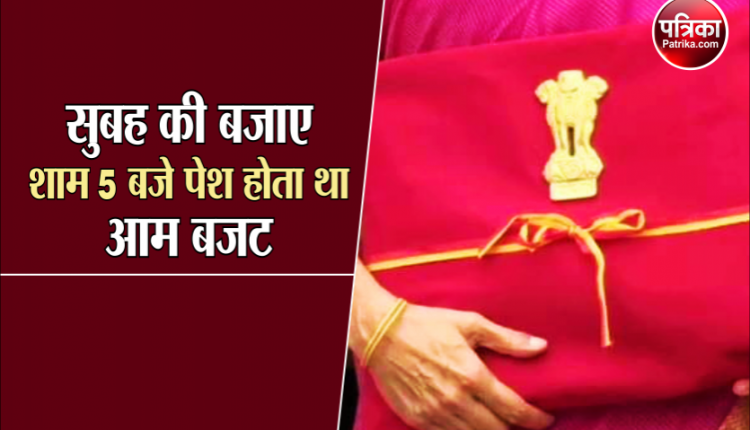 new Delhi. Finance Minister Nirmala Sitharaman has presented his general budget today (Budget 2021). Which started as usual from 11 am on the first of February, but there was a time when the general budget of the country was presented not on the first day of February but on the last day, and its time was 5 pm. You may be surprised to know this, but this trend started in the year 1924, during the British rule. Which lasted till the year 1999.

Also read: –Budget 2021: Finance Minister Nirmala Sitharaman gave big gifts to women, will be able to work in all shifts, will get adequate facilities

Why was the evening budget

It seems strange to have any action of Parliament in our country at 5 pm. But at the time of slavery, the British used to work as per their convenience.

Time difference between India and Britain

Actually there is a big difference between the time of India and Britain when it is 5 o’clock in the evening in India, then it is around 11 in the morning in the British capital London. After this, all the leaders of the British Parliament were able to relax and listen to the budget on the radio. And that was the reason that our budget was timed according to their convenience.

Also read: – Know about such countries of the world, where INCOME TAX is not to be filled

Time difference a reason
One of the major reasons for presenting the budget at 5 pm was that if we started the time of taking action on our general budget at 11 am then in Britain it would have been 5 am. And at this time the stock exchange was closed and there was no movement according to the budget. In view of this, the budget time of British India was reduced to 5 pm.

Not only this, due to its convenience, the budget was presented on the last day of February because a lot of hard work has to be done while presenting the budget. Due to which people were quite tired. For this, the process of presenting the budget started to be laid on the last day of February to give comfort to the employees and officers. So that the people associated with the budget can relax by taking leave on the next day and the beginning of the month.

Tradition broke after independence of the country

After the country’s independence, many things were changed. Because the time of peace was tiring of Indian leaders. As the budget was presented at 5 in the evening, the finance minister would have to go to midnight to respond to the media and complete the action, seeing that former finance minister Yashwant Sinha and then finance secretary Vijay Kelkar admitted that in the morning Time is better for presenting a budget. And after discussion in the year 1999, it was considered necessary to break the old tradition. After this, the budget of 1999-2000 was passed on February 27 at 11 am. Similarly, the month also changed.