Bollywood Round Up: Read Entertainment’s 10 Big News and Gossip Today 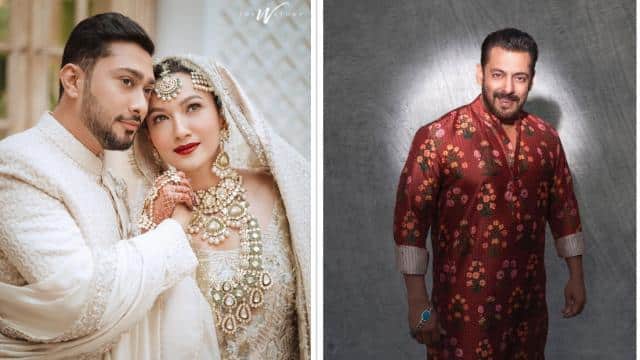 The wait for Gauhar Khan and Zaid Darbar’s marriage is over. The two were reunited at the Nikah Ceremony held at ITC Grand Maratha Hotel in Mumbai. In this hotel was organized from Mehndi to Nikah. Both Gauhar Khan and Zaid Darbar have reported Nikah and shared pictures on their Instagram account with the caption ‘Qubool Hai’. Both the stars have been sharing pictures of their wedding show continuously for the past several days. Not only this, both had also conducted pre-wedding photo shoots and shared photos with the fans. Earlier on Thursday night, both stars celebrated their mehndi ceremonies. During this, Zaid Darbar’s father and veteran musician Ismail Darbar was seen singing in the song Lut Gaye Hum Teri Mohabbat of ‘Hum Dil De Chuke Sanam’.

2. Salman has made these actors a star before his brother-in-law Ayush Sharma

The teaser of Salman Khan’s next film Final has been released. Salman Khan and his brother-in-law Ayush Sharma will be seen in this film. Salman Khan is known as the Robinhood of Bollywood. Considered to be Dildar, the actor has given a platform to many new faces in Bollywood. Salman has also helped a lot in bringing the careers of many people from actors to singers and musicians back on track. These include stars like Bobby Deol, Govinda, Sunil Shetty, Katrina Kaif, Armaan Kohli.

Actress Sunayna Faujdar, who played Anjali Bhabhi in the comedy show ‘Taarak Mehta Ka Ooltah Chashma’, has done a great dance on the song Hussan Hai Suhana of Coolie number one. Sunayana Faujdar has shared the video of her dance on Instagram, which is being liked by many people. Not only this, Sunayna wrote in the caption with her dance video, ‘Proud to be in the 1990s. These songs have inspired me to dance and act. His dance before the release of Coolie number 1 movie is being well liked. On Christmas, this movie of Varun Dhawan and Sara Ali Khan has been released, which is a remake of 1995’s Coolie No.1 film by Govinda and Karisma Kapoor.

Varun Dhawan and Sara Ali Khan’s movie ‘Coolie No.1’ has been released on Amazon Prime. The comic timing of Varun Dhawan is quite good in this film, he has tried to do justice to his role. But the movie, released as a remake of the 1995 film, seems to be running entirely on the old story. Apart from missing Kader Khan and Govinda, you will also be seen missing comic timing. Paresh Rawal has replaced Kader Khan in this film. He seems to do justice to his role, but does not look like Kader Khan in comic timing.

6. Rajinikanth, admitted to the hospital due to deteriorating health, is suffering from blood pressure problem

Actor Rajinikanth has been admitted to hospital in Hyderabad after his health deteriorated. The veteran actor is said to be suffering from blood pressure problem. He has been taken for treatment due to excessive fluctuations in his blood pressure. Bulletin has been issued by Apollo Hospital regarding the health of Rajinikanth, who recently announced to form a political party. The statement issued by the hospital said, “Rajinikanth has been admitted to the hospital this morning.

Sharing the story of shooting for Sholay, Amitabh Bachchan said, ‘When we were shooting for this film, Dharm ji was down and I was on the hill. Dharmendra opened the chest and started filling bullets. He did this several times, but was unsuccessful. He was very upset. He then took the cartridge and put it in the gun. It contained real bullets. He was very upset about not getting the right shot and fired. I felt a voice. Actually I was standing on the hill and the bullet went out of my ear. ‘

8. Remo D’Souza’s wife Liezel told Salman to support him, thank you, Bolin- you are an angel

Choreographer and director Remo D’Souza recently returned home after being discharged from the hospital. Now on the occasion of Christmas, wife Liezel has shared a photo of her with Remo. He told that Remo’s coming back home after recovering is his biggest Christmas gift. Along with this, he has thanked Salman Khan for supporting him in difficult times. Liezel shared a photo on Instagram in which she is seen hugging husband Remo D’Souza. She wrote in the caption, “My best Christmas gift ever. I will cherish this moment forever. After one week’s worst emotional ups and downs, I am hugging you. ”

9. Kangana Ranaut congratulated such people on wishing them a merry Christmas, know what they said

Actress Kangana Ranaut shared a photo of Christmas celebrations. Along with this, he has also taunted some people giving their Christmas greetings. Kangana tweeted, ‘Merry Christmas to only those who respect and accept all Indian festivals. Merry Christmas to those who do not criticize Hindus only. Kangana Ranaut has taken a dig at people who show bigotry about festivals in this post. Some people are trolling him on this post too. A user has accused him of playing politics through this post.

10. Naushad: used to do harmonium repair and gave great musicians, singers like Rafi and Lata a chance

Today is the 101st birth anniversary of Naushad Ali, who introduced western instruments in Indian music and played classical music with equal rights. Naushad was born in 1919, a few years after the beginning of Indian cinema. The years passed from Mughal-e-Azam to Pakija to Naushad, who composed music for all the super-duper hit films, but are still in our midst due to their numbers. Naushad’s film career is the story of reaching Arsh from the floor. Naushad Ali, who worked as a harmonium repairer in childhood, became very fond of music. His father was strongly against it and considered music as separate from Islam. He had clearly told Ali that you have to choose either home or music. In the end Naushad Ali chose music and left home and went to Mumbai.

This 1 rupee coin will change your life, can earn 9 million 99 million

Gauhar Khan and Zaid Darbar’s marriage, both of them wrote ‘Qubool Hai’ on Instagram, see photos