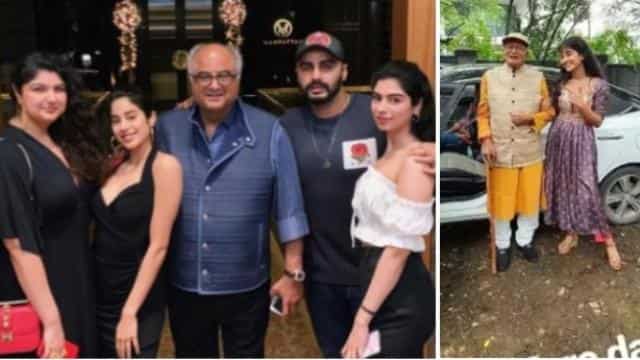 1- Bonnie Kapoor’s house help turned out to be Corona positive, said- I, Jahnavi and Khushi are fine

The case of Corona has come out in the house of Bollywood film producer Boney Kapoor. Actually, one of his house help has turned out to be Corona positive. Boney Kapoor says that house help Charan Sahu (23) lives with us in Green Acres, Lokhandwala Complex, Andheri, Mumbai along with Mere, Jahnavi Kapoor and Khushi Kapoor.

Yeh Rishta Kya Kehlata Hai Actress Shivangi Joshi’s grandfather has passed away. He died on 18 May, the day Shivangi’s birthday happens. Shivangi Joshi gave this news to fans on Instagram sometime back. Actually, Shivangi had planned to chat live with fans and surprise them on the occasion of his birthday (18 May). However, due to the demise of Dada, he canceled the plan.

3- Fan asked Akshay Kumar- Sir, how is your daughter? The actor said- Nitara is good, in the morning she has beat me in a bicycle race

Actor Akshay Kumar is one of the busiest actors in the Bollywood industry. Currently, lockdown is in force due to Corona virus in the country and Akshay Kumar is spending quality time with the family. Recently Akshay Kumar posted a post on his Instagram, on which Fan wrote to him asking questions, Sir, how are you and how is your daughter?

These days all the celebs are locked in the house due to the lockdown. Although some celebs are doing their work sitting at home. Priyanka Chopra and Nick Jonas are in Los Angeles these days. Meanwhile, Nick is teaching Priyanka the piano. Priyanka recently told that Nick trains her for 30-45 minutes daily.

5- Preity Zinta played the character of Teenage Pregnant in her first film, people said – career will be over

Preity Zinta has completed 20 years in Bollywood. Preity started her career with the film Kya Kehna. Let me tell you that in her first film, Preity played an unmarried teenage pregnant. Preity has shared her experience with this film.

6- Shahid Kapoor’s mother Neelima Azim said about daughter-in-law Meera Rajput, has given a lot of love and happiness to her son

Shahid Kapoor’s mother Neelima Azim recently spoke about her two sons Shahid Kapoor, Ishaan Khattar and daughter-in-law Meera Rajput. Neelima said, when Ishaan was born, then Shahid started dancing in the street. In an interview to Pinkvilla, Neelima said, “Shahid only wanted me to be a mother again.” When he was 14 years old, he told me that he needed a brother. When Ishaan was born, the doctor was not the first to greet me. He said congratulations to Shahid. He found his brother. Shahid was most happy with Ishaan’s birth.

7- During the days of struggle, Nawazuddin Siddiqui used to have food for a time, he did not get work due to his looks.

Bollywood veteran actor Nawazuddin Siddiqui is not an idiot. He has made a special place in the hearts of people with his acting. Every character played by Nawazuddin has always been appreciated by the audience, but his journey to reach Bollywood was not so easy. He has endured days of poverty in Mumbai. The condition was that after receiving food at one time in the day, there was no place to check whether food would be received at other times. Today is Nawazuddin’s birthday. Today, let’s look at their struggle on this special occasion.

8- User asked- Are you a man, then Vikas Gupta gave this funny answer

Due to the lockdown, all the celebs are bored in the house, so they keep interacting with the fans in between. Now Bigg Boss ex contestant Vikas Gupta posted an Ask me a question session on Instagram. During this time, Vikas was asked many questions and Vikas answered all. But one user asked Vikas a very strange question, but Vikas, known from Master Mind, also gave a funny answer.

All celebs are locked in the house in lockdown. However, in the meantime, everyone is very active on social media. Now a video of Tamannaah Bhatia is going viral. In this video, Tamanna has used a mustache filter, which shows a mustache on her face. In the video, Tamannaah is seen stroking her mustache.

Telugu superstar Chiranjeevi shared a picture of himself with his wife, saying that times are changing, but things remain the same.