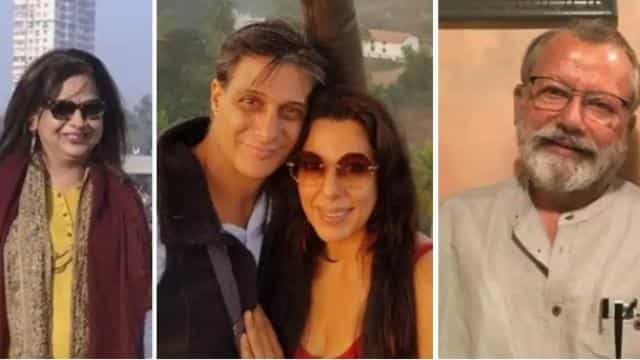 1- Neelima Azim on Pankaj Kapoor’s Divorce – Shahid was only 3.5 years old when Pankaj decided to separate.

Neelima Azim single-handedly raised Shahid Kapoor. He was only three and a half years old when Pankaj Kapoor parted with Neelima Azim. During an interview recently, Neelima Azim spoke openly with Pankaj Kapur on the divorces and told how difficult it was for her to have a single mother.

2- Pooja Bedi left for Goa with fiancé Manek, both were quarantined after doing corona test

LockDine 4 has been implemented in the country. In such a situation, actress Pooja Bedi has left for Goa with her fiancé Manek Contractor. Pooja Bedi gave this information to her fans via Twitter. She went from Mumbai to Goa because her house, car and business are all in Goa. After reaching Goa, both were tested for corona and were asked to be quarantined for 14 days.

3- Fan asked Nusrat Bharucha- Will you marry me? Actress said- Thank God Mommy is not on Twitter

Actress Nusrat Bharucha recently celebrated her birthday with her parents and grandmother. She could not have a birthday party due to the Corona lockdown, but did enjoy some people. Apart from this, for fans, ‘Dream Girl’ put a question-and-answer round on Twitter. Many celebs on social media congratulated the actress on her birthday. Fans also did not lag behind.

4- Nawazuddin Siddiqui quarantined, wrote by tweeting – has arrived here following all the guidelines

Lockdown is in force in the country due to Corona virus. In this way, Bollywood actor Nawazuddin Siddiqui has reached his home from Mumbai to Uttar Pradesh. He is in Budhana in Muzaffarnagar district. According to the news, Nawazuddin along with his family has been quarantined for 14 days. However, all reports have been negative.

Alia Bhatt sent chocolates for doctors, along with this special note

Bollywood actress Alia Bhatt is always doing something to help the Corona Warriors. Now recently Alia has sent some special goodies for doctors and has snacks, chocolate and some juice.

6- Karan Johar asked son, who am I, Yash said – you are a monkey

Karan Johar spends quality time with children in lockdown. He shares funny videos with both of them these days. Fans also like videos of both. Now Karan has shared the new video. In the video, Karan points towards Yash and says who are these, Yash himself responds and says, I am Yash Bhaiya.

Kangana Ranaut has already proved that she is not only a good actress but also a Shanadan director. Kangana is currently in Manali with her family and writing a poem in the midst of lockdown. The poem that Kangana has written recently is on the sky. Kangana has directed this video along with writing poetry.

8- Nusrat Bharucha will marry soon, the mother of the actress said- We have already given her a lot of time, now she has to listen to us

Bollywood actress Nusrat Bharucha is very active on social media. Lockdown is giving updates to how the family is spending with the family. Nusrat has also been trolled many times on social media, for his bold style and appealing clothes. Recently Nusrat Bharucha talked about marriage and dating, as well as his mother confirmed that the actress is going to get married soon.

9- Rinku Rajguru will be seen in Amitabh Bachchan in the film ‘Jhund’, but the actress is worried about her studies

Actress Rinku Rajguru, who made everyone crazy with the film Sairat, is worried about her studies these days. He is deeply troubled by rumors that the examinations were postponed due to Corona. Rinku said, a rumor is flying that our exams have been postponed. We had done all the preparations, but now what will happen.

10- Neha Dhupia was trolled for abusing Contestant, actress said- I was humiliated without mistake, my family was commented wrongly