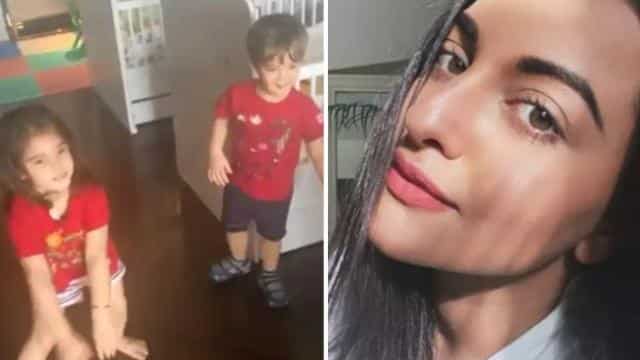 Filmmaker Karan Johar is trying to keep his twins (Yash and Roohi) entertained due to the lockdown. They keep posting videos related to their dance, fight, fun, on social media. Recently, he has shared a dance video of Yash and Ruhi. In this, both are seen trembling on the song ‘Girl Aankh Mare’. And they are dancing like no one is watching. Ruhi is dancing lately on the floor. At the same time, Yash is seen having fun with his Dada (Karan Johar).

2- Dayaben’s real parents have been part of ‘Tarak Mehta Ka Ooltah Chashmah’, which episode was seen, the actress gave information

From Dayaben’s manner of speaking to his laughter and the tone of talking to his mother, everyone has liked it. But ever since she disappeared from the show, the fans have been waiting for her to come back. Recently, Disha told in an interview that in an episode her real parents have also been part of ‘Tarak Mehta Ka Ooltah Chashmah’. He was seen as a relative of Champaklal. Let us tell you that Champakalal plays Jethalal’s father.

3- ‘Bigg Boss 13’ fame Madhurima Tuli has been in school, told- how girls used to say, oh how much sister

Recently, in a conversation with the Times of India, Madhurima Tuli spoke openly on her career and challenges. He also told how girls used to bully him in school and called him as behenji. Madhurima has proved herself by facing him. Today he has a lot of name in the industry. And fan following is also strong.

4- Madhuri Dixit gave the gift to fans, release of teaser of Candle Song

Bollywood’s Madhuri Dixit has a 53rd birthday today. On such an occasion, Madhuri has given a return gift to her fans. Actually, a song by Madhuri is about to be released. The name of the song is ‘Candle’. Madhuri has shared this teaser on her social media by giving her silky voice. ‘Candle’ here means a ray of hope. Thousands of people have died due to corona virus. In such a situation, Madhuri has brought this song and she has composed this song while giving respect to the Corona Warriors.

The entire country is troubled by the Corona virus. The lockdown in the country due to Corona has greatly affected the lives of daily wage laborers. However, Bollywood celebs are trying their best to help him. Now Sonakshi Sinha has come forward to help the daily wage laborers.

6- From Shahrukh Khan-Karan Johar to Ranbir Kapoor-Ayan Mukherjee: these are the best friends in the Bollywood industry

The Bollywood industry is not only of enmity, fighting and competition, but also of friendship and love. There are many celebs in the industry who believe in solid friendship. The bond between them reminds all of us of our childhood friend.

7- The little guest is going to come in Priyanka-Nick’s family, Sophie appeared with baby bump

Priyanka Chopra and Nick Jonas are going to have a small guest soon. Actually, Priyanka’s Jethani Sophie Turner is pregnant. Sophie is recently seen walking outside the house with husband Joe. During this, Sophie’s baby bump was clearly visible. During this both of them are wearing masks as well as goggles.

The web series ‘Patal Lok’ produced by Anushka Sharma has been released. Hades are getting good reviews. Anushka has now shared her photo in which she is watching Hades. Anushka shared this photo and wrote, ‘Everybody of the world is watching Hades.’ This photo of Anushka is being well liked on social media.

9 – INOX multiplex fueled by release of films on OTT platform, said – this decision is disappointing

There are lockdowns due to Corona virus in the country. In such a situation, due to the closure of theaters, it was decided to release the film Gulabo Sitabo on Amazon Prime Video. After this announcement, INOX Multiplex has expressed its displeasure by writing a post on social media.

10- Sunil Lahiri shares the picture of his younger days, his fans are not tired of praising

Sunil Lahiri, who played Laxman in the serial Ramayana, is very active on social media. He shares something for his fans. Now he has posted such a picture, due to which fans are not tired of praising him on social media. Sunil shared this photo on Twitter account.

‘This is not an accident, it is a conspiracy, the CBI should investigate’, the social media boiled over the death of the lawyer of Palghar Lynching

Corona told what is the importance of health insurance, plan ahead