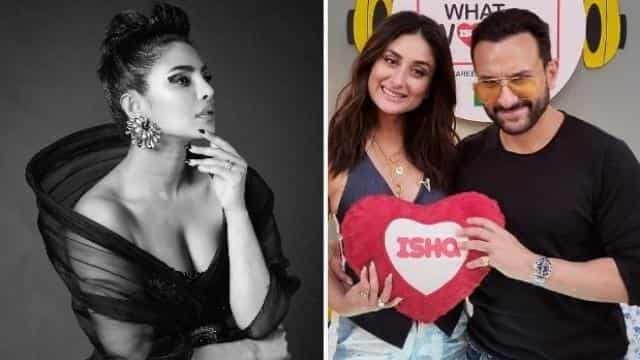 Kareena Kapoor Khan and Saif Ali Khan are one of the best couples in Bollywood. Both look great together. But do you know that Kareena is very positive about Saif. Actually, an interview of Saif-Kareena is going viral in which it was asked which of the two of you is more positive? Saif says that we both love each other a lot and we are both very positive for each other.

Katrina Kaif seen swimming with her friend in the sea, video going viral on social media

Bollywood’s beautiful actress Katrina Kaif is spending time at home. Along with this, she is also very active on social media. Now he has shared a video of his, which is being well liked. In the video, a large whale is seen floating inside the sea. This video of Katrina is becoming very viral on social media. He said in the caption of this video that this whale is his friend. He wrote in the caption, ‘Beautiful day at sea with my illustrious friend’. Many of her fans are responding to this video of Katrina.

Bollywood actor Varun Sharma’s manager and Sushant Singh Rajput’s X-manager Disha Salian has committed suicide by jumping from the 14th floor in Mumbai. It is being told that she lived with her fiancé in Malad, Mumbai. As soon as he got information about the incident, he was taken to the hospital in Borivali where he was declared dead. There is no reason behind the suicide. Bollywood is going through a difficult time at the moment. Many celebs have committed suicide due to lack of work.

Talking about the economic situation, Rajesh Karir became emotional, said- It is not easy to ask for help like this, you have to kill yourself.

TV actor Rajesh Karir recently posted his video on social media seeking financial help. So far, people have deposited Rs 12 lakh in their account. Now Rajesh told that he needed the money so that he could go back to Punjab and find some employment there. In an interview with Hindustan Times, Rajesh said, “I have applied for a living certificate in the son’s school.” Hopefully, we go to Punjab by Thursday. I will not leave Mumbai forever. Here I have worked full life. I can’t learn new skills at this age.

The onscreen duo of superstars Shah Rukh Khan and Kajol are well liked. Together, both have given many excellent films to the Bollywood industry. However, Shah Rukh and Kajol are very good friends in real life. Offscreen bonding of both is greatly preferred. Meanwhile, a video is going viral, in which Kajol is seen having fun with Shahrukh.

Sand was laid inside the studio, then the sea-shore scene was shot, Sunil Lahiri narrated the story

Lakshman of the famous serial Ramayan, i.e. Sunil Lahiri, has been sharing interesting stories related to the show for the past several days. Now he has told how the sea scene was shot in the 35th episode of Ramayana. He shared a video of himself on social media and revealed that the scene was shot not inside the beach but inside the studio. In the video, Sunil Lahiri said, in yesterday’s episode you must have seen that we have reached the sea and are crossing Lanka. During this, Ramji says that let all of us pray to the sea god and worship him. We did not do that shot on the beach.

Bollywood’s beautiful actress Preity Zinta Social is spending time with husband Jane Goodinff these days. Along with this, she is also very active on social media. She often posts her pictures with her husband. Now she has shared a funny video, in which her husband and belly dog ​​Bruno is seen. In this video, Preity’s husband Doug is seen mimicking Bruno. Preet has reported that these are the side effects of quarantine. The video shows Jane sitting on the couch with Bruno. Preeti makes some sound after which Jane and Bruno start doing similar expressions in front of the camera. Sharing the video on Instagram account, Preity has given a fun caption.

VIDEO: Another video of Aishwarya Rai Bachchan’s look created a stir on the internet, the actress recreates this look

Aishwarya Rai Bachchan is one of the most beautiful actresses in the Bollywood industry. It is still thought of for them. But many people probably do not know that Aishwarya Rai is also like Bachchan. There are not one, but many, many similarities. Apart from Mansi Nayak and Mahlagha Jaberi, another lookalike of Aishwarya Rai Bachchan has dominated the internet. His name is Amuz Amrutha. He has crores of followers on Tittock and Instagram. On social media platform, she recreates many scenes of Aishwarya Rai and posts videos. Mostly, there are scenes from South film in it. Amritha has 1.2 million fans on TicketLock. At the same time, there are more than one lakh 86 thousand followers on Instagram.

Priyanka Chopra had quit advertising fairness cream because of this

Demonstrations have been going on in several parts in the US since the death of George Floyd. Voices against apartheid are being raised in this demonstration. Bollywood celebs also voiced against apartheid, but some celebs faced trolling because some of those celebs advertised fairness cream.

Talking about the economic situation, Rajesh Karir became emotional, said- It is not easy to ask for help in this way, you have to kill yourself.