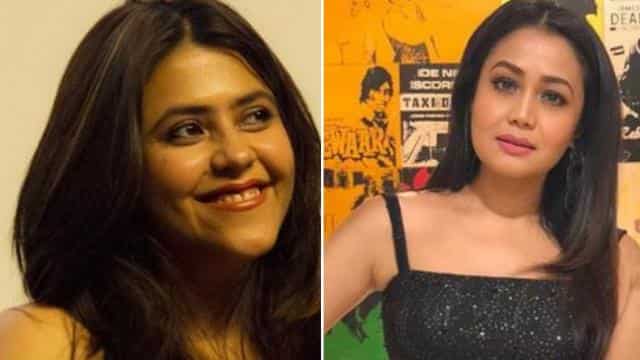 When Tony and Sonu were struggling in Mumbai, Neha Kakkar used to help by sending money from Rishikesh

Bollywood’s famous singer Neha Kakkar is celebrating her birthday today. Every song of his is very well liked. Every song she sings becomes popular among the youth. Neha started working from a very young age. She used to sing hymns in Jagran in childhood. His journey to Bollywood was very difficult. Brother Tony Kakkar told that Neha has not changed at all even after reaching this stage. She still waits for her birthday like a child. Along with this he told about the days of struggle.

Bollywood actress Kangana Ranaut, who is known for her impunity along with acting, has strongly targeted Bollywood on the issue of apartheid. Kangana has said that the Indians who advertise Fairness Cream are speaking out on violence against blacks, nothing is bigger than this. He taunted that Bollywood celebrities speaking on the social issue of America are silent on the killing of the monk in Palghar.

Bollywood actor Ritesh Deshmukh is very active on social media. He keeps entertaining his fans by posting something. Now he shared a new funny video which his fans are very fond of. His wife Genelia D’Souza is also seen in this video.

Bollywood star Sonu Sood is on social media these days. The past days were very active in bringing the migrant laborers to their state and this help of Sonu Sood won the hearts of people by moving forward in the service of the country caught by the corona virus. Sonu Sood and his team are constantly trying to get people to their homes located in UP, Bihar and other states without being tired and non-stop. It is now reported that Sonu has sent 173 migrants from Uttarakhand on a special flight to Dehradun.

Sara Ali Khan loves her brother Taimur very much. She also shares photos with Taimur. Sara once told during an interview that Taimur called them round. Sara had said, ‘Whenever Timur sees me, he calls me round. I do not know why he speaks Gol because now I am not Gol (fat) at all. ‘Sara also told that Timur calls Kareena Amma, Saif as Abba and Ibrahim as brother. Let me tell you that in an interview, Sara had said about the bonding of Saif and Taimur, ‘It feels good when the father is happy with Taimur. Along with Timur, he enjoys the Fatherhood very well. Taimur has brought happiness in his life.

Former contestant of TV’s most controversial show ‘Bigg Boss 13’ Vikas Pathak aka Hindustani Bhau had recently filed a complaint in Mumbai against TV’s famous producer and director Ekta Kapoor and her mother Shobha Kapoor. However, a latest update has come out on this matter. According to the news, Hindustani Bhau has sent a legal notice to Ekta Kapoor regarding the adult web series ‘XX: Unsigned’. Ekta Kapoor may have to bear a loss of Rs 100 crore due to this legal notice. This has been disclosed by Hindustani Bhau’s lawyer Ali Kashif Khan.

Bollywood’s beautiful actress Malaika Arora is currently spending time with her son Arhan. Meanwhile, he has shared many photos of himself and Arhaan on social media. Now he has made fun of Arhaan and his cousin Nirvan’s fashion sense. Malaika has shared an old photo of the two on her Instagram account. In this photo, Arhaan and Nirwan have tied a prettied hairband on their foreheads. Sharing the photo, Malaika wrote in the caption, what were you guys thinking. What did you think that you two look like a crook? Armaan’s mother and Sohail Khan’s wife Seema Khan commented on this post, writing, “They need to award.” However, Arhan did not understand this joke of mother Seema, so he commented and asked – why?

An FIR has been lodged against three people including Kapoor on charges of spreading obscenity, hurting religious sentiments and insulting national emblems through broadcasting a web series on famous producer Ekta Kapoor’s OTT platform Alt Balaji. The accused named in the case include the director and screenwriter of this web series.

Bollywood’s popular musician Wajid Khan left the world on 1 June. After Wajid’s departure, a statement has been issued by his family. This statement was released on Sajid-Wajid’s Instagram account. The statement reads, ‘Our beloved Wajid Khan died at 12.30 pm on June 1 due to a heart attack. He was 47 years old. He was suffering from a throat infection related illness and underwent a kidney transplant last year which was successful.

The Jhansi police on Friday praised Bollywood actor Sonu Sood for making headlines for helping migrant laborers. The Jhansi Police wrote on its Twitter handle with a song composed for the migrants that Sonu has paid the debt of humanity, including ‘Sood’, by bringing home to the needy. Replying to this, Sonu praised the Jhansi Police and appealed to the public to follow the Kovid rules.

Neha Dhupia, who came out of the house after 80 days, said- Feeling freedom, but also feeling scared