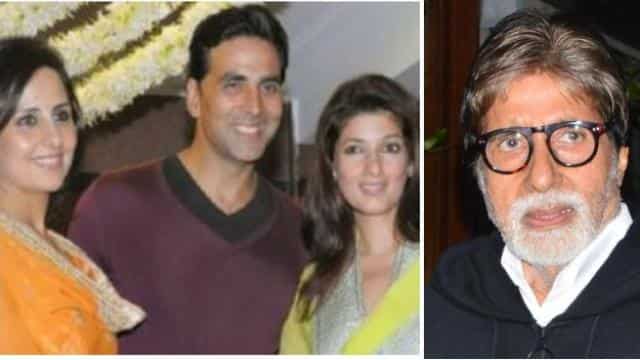 Everyone is troubled by the corona virus. Due to the applicable lockdown in the country, they are hardly able to move anywhere. Bollywood celebs are also imprisoned in their homes. Actor Akshay Kumar has donated 25 crores in PM Cares fund, three crores in BMC and 45 lakh rupees in CINTAA. At the same time, on the other hand, he is not backing away from plundering wealth on the family. Flights have started in the fourth phase of lockdown. Akshay Kumar has booked the entire flight to send sister Alka Bhatia and children from Mumbai to Delhi.

Many migrant workers are stranded away from their homes due to the lockdown. After Sonu Sood, Swara Bhaskar, Amitabh Bachchan has now come forward to help these laborers. For the migrants, 10 buses from Mumbai have been left for UP on behalf of Amitabh Bachchan and his office AB Corporation Limited. On Friday, 10 buses were flagged off from Haji Ali Juice Center in Mumbai for Uttar Pradesh.

Actress Hina Khan, who ventures into films from the TV world, is also in the discussion about personal life. Hina is very happy at this time. Actually, she has met boyfriend Rocky after a long time. Hina and Rocky were not getting out of the house due to the corona virus. Both were following social distancing. However, now the two have met after a long time and this is why Hina Khan has posted a selfie with Rocky on social media, which is very cute.

Actor Shahid Kapoor shares special bonding with father Pankaj Kapoor. But this was not the case earlier. Pankaj Kapoor gave the award to Neelima Azim when Shahid was only three years old. Pankaj Kapoor spoke openly about his and Shahid’s relationship in a recent interview. He also told how he re-entered Shahid’s life after divorcing from Neelima Azim.

5- ‘Bidai’ fame Sara Khan was trolled for sharing bikini photos, told how to get rid of negative comments

‘Bidai’ fame Sara Khan Akka ‘Sadhana’ has made her special identity among the audience. He has done many big reality shows ranging from participating in Bigg Boss. The actress started her career at a very young age. She became a well-known face of the TV industry when she was in school. There are very few celebs who have a chance to work in the Pakistani film industry other than India, and Sara is one of them. Recently Sara Khan made several revelations in her career, bargaining negative comments on sharing bikini photos, and family conversations.

Karan Johar recently did a screen test of both his children. First he took the test of his son Yash and asked him to give different expressions. Yash gave angry expressions first, then smiling and then loving ones.

7- ‘Radhakrishna’ fame Sumedh Mudgalkar is a fan of Nitish Bhardwaj, said- he used to watch him daily on TV to play the role of ‘Krishna’ in the show.

‘Radhakrishna’ fame Sumedha Madgalkar followed Nitish Bhardwaj for the role of ‘Krishna’. He learned his character in the serial by watching him on TV. He understood how to play the character of ‘Krishna’, seeing Nitish.

9- A bus costs so much to send migrant laborers home, Sonu Sood told himself

The lockdown has had a significant impact on the daily wage laborers. They do not have work and without work they are facing a lot of problems. However, Sonu Nigam came forward to help these laborers. Sonu has transported thousands of migrant laborers from Mumbai to their homes so far. Sonu arranged buses for these laborers and through this he sent everyone home. Not only this, Sonu also sent food for those laborers so that not all laborers travel on empty stomach.

Bollywood actress Nina Gupta’s daughter and famous designer Masaba Gupta has been in the news due to a throwback photo of her. In these photos that have gone viral on social media, Masaba is seen wreaking havoc in Mokokani. Fans are very fond of his photo. Masaba’s photo has been shared by the designer himself on his Instagram.