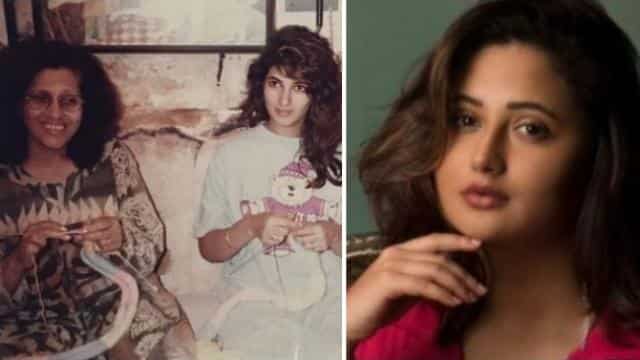 1- Twinkle Khanna is missing Nani, became emotional, said- no one can take her place in the heart

Actress and writer Twinkle Khanna shared the Eid special post. Twinkle Khanna became emotional remembering Nani. She writes that very little happens on Eid when we make biryani. Our treat becomes special only when granny’s favorite khichda. Also beautiful Eidi envelopes are prepared. This year, both our heart and the table are quite empty space that no one can fill, except for them.

2- Rashmi Desai out of ‘Naagin 4’, the makers will make many improvements in the serial

TV actress Rashmi Desai was seen in the role of Shalaka in the serial ‘Naagin 4’. But now news is coming that she has not been a part of this show. Let us tell you that Rashmi Desai had entered the show in the month of March. After the end of ‘Bigg Boss 13’, Rashmi Desai’s entry in the serial was being told to be contravershil. Now the makers have decided that they will improve the serial, due to which the roles of the old actors will be reduced and new actors will be entered.

3- Film and TV industry will soon return to the track, Producers Guild of India sent guidelines to the Chief Minister of Maharashtra to start shooting

Bollywood industry is coming back on track again. In fact, the Producers Guild of India had sent guidelines to Maharashtra Chief Minister Uddhav Thackeray to resume shooting. Following these guidelines, shooting of TV and film industry can be resumed. Recently the Producers Guild of India gave a tweet informing people about the matter. He also thanked the CM of Maharashtra.

TV actress Deepika Kakkar celebrated Eid with husband Shoaib Ibrahim. During this time, Deepika is wearing a pink color cotton suit with which she is wearing matching bangles. Deepika may have kept her look simple, but she looks very beautiful in it. At the same time, Shoaib is wearing a pink color kurta. Let us know that Deepika celebrates all the festivals with her in-laws loudly.

Actor Sanjay Dutt lost his father Sunil Dutt on 25 May 2005. Today, on the occasion of Sunil Dutt’s death anniversary, Sanjay Dutt has posted a video on social media. Also, he has been very emotional while writing the post.

Comedian Vir Das’s neighbor recently threatened to slap him. Actually, the neighbor was angry because of not wearing the mask of Veer Das. Veer Das has shared a video of the neighbor. In the video you will see that their neighbors are threatening them. At the same time, Veer Das is telling them to stay 6 feet away.

Actor Arjun Kapoor is very much discussed on social media. From professional life, he keeps sharing with personal life fans. Recently, Arjun Kapoor shared a photo. This photo is not of any celeb or his own, but of mango. The surprising thing is that Arjun has compared this photo to Katrina Kaif.

8- Rana Daggubati of Bahubali did propose to girlfriend Mihika in this way, gave this answer regarding ‘Grand Wedding’

On May 12, Bahubali actor Rana Daggubati surprised everyone by announcing her engagement with long-time girlfriend Mihika Bajaj. Seeing pictures of Rana and Mihika on social media, the fans were not happy. Roca and Mihika’s Roca Ceremony pictures went viral on social media. Now a week after the engagement, Rana told how he proposed to Mihika.

Actor Ayushmann Khurrana has carved a distinct image for films based on better content and he is very happy that his work will be recreated in the South Indian film industry. He says that films have the potential to transcend language, culture and boundaries.

10- On the birthday of Kunal Khemu, daughter Inaya congratulated her by singing, watch cute video

Today is Kunal Khemu’s birthday. On Kunal’s birthday, his daughter Inaya Khemu has sung a special birthday song for him. Inaya sang Happy Birthday Song while playing the piano. Seeing this video of Inaya, smile will come on your face too.

The user said, preparations are being made to make your idol, so Sonu Sood said – Brother help the poor with that money