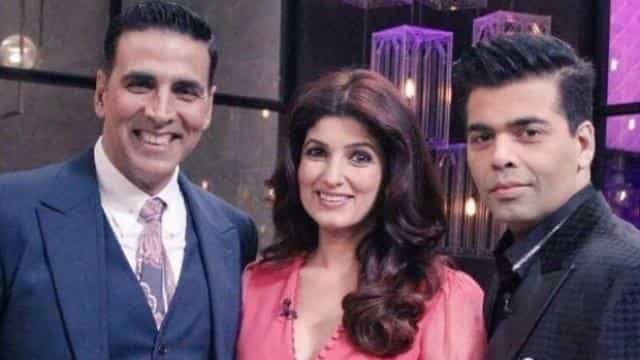 1- Karan Johar asked Twinkle Khanna- What is there in Akshay Kumar that is not in all three Khans? Actress’s reply stopped her speaking, watch video

Bollywood actress Twinkle Khanna has been away from the big screen for quite some time. He now started writing books. Twinkle Khanna does not hold back from expressing her opinion on anything. Be it public or on the social media platform. A few years ago, Akshay Kumar and Twinkle Khanna joined Karan Johar’s show ‘Koffee with Karan’.

2- Disha Patni was seen sitting on the beach wearing monokini, her bold style created a panic on social media

Actress Disha Patni is very active on social media. She is imprisoned at home due to the lockdown. In such a situation, she is sharing many of her photos with fans. Disha Patni has a perfect bikini body. It also endures Calvin Cline’s bikini, in which Disha is seen flaunting her curves. Now Disha Patni has shared a throwback photo of her in Monokini, which has created a stir on social media.

3- Dharmendra could not stop his tears on Isha Deol’s farewell, video is becoming viral on social media

Actress Esha Deol has shared a video of her farewell on social media. In this, Hema Malini and Dharmendra are seen leaving them after marriage. Let us tell you that Isha Deol is married to businessman Bharat Takhtani.

4- Learn how the fans got the trailer of Gulabo Sitabo, these reactions on social media

The trailer of Amitabh Bachchan and Ayushmann Khurrana’s film Gulabo Sitabo has been released. Let us know that both stars are working together for the first time through this film, so the fans were very excited about this film. The film could not be released in theaters due to the lockdown, so the makers decided to release the film on the OTT platform. Now that the final trailer has been released, the fans are giving their reaction on it. Most people have praised the trailer, while some did not like this trailer much. So let’s see what users are saying by watching the trailer-

The trailer of Amitabh Bachchan and Ayushmann Khurrana’s film Gulabo Sitabo has been released. In the film, Big B plays an elderly Muslim. The trailer begins with an argument between Big B and Ayushmann. From start to end, the two fight each other over the mansion. However, by watching this fight you are going to be entertained.

6- Ratan Rajput trapped in village for 3 months due to lockdown, Litti Chokha made on the last day

TV actress Ratan Rajput was stuck in her village for a long time due to the lockdown. There he had to face many difficulties too. But now Ratan seems to be coming to his house. Actually, she shared her video on Thursday night in which she is making Litti-Chokha. Ratan shared this video and wrote, ‘Last Dinner’.

Finally, the police have filed chargesheet in the Dabangg girl Sonakshi Sinha fraud case in the court. The event manager had been pleading with the officials for a long time to be a victim of fraud. From the DGP to the Chief Minister, the Prime Minister and the Home Minister, the victim also sought justice through Twitter.

9- Then the rumor of Mumtaz’s death went viral, the actress said – Why do people want to kill me

The false news about the popular actress Mumtaz of the 70s is once again going viral. Recently, false news of Mumtaz’s death came due to which the actress is also upset. Speaking to the Times of India, Mumtaz said about these reports, ‘I am still alive and absolutely humorous. I was glad that someone confirmed me by calling. I do not understand why someone does this. Last year too, there were reports that my family and other relatives were upset.

10- Kapil Sharma apologizes to Kayastha society, know what is the matter