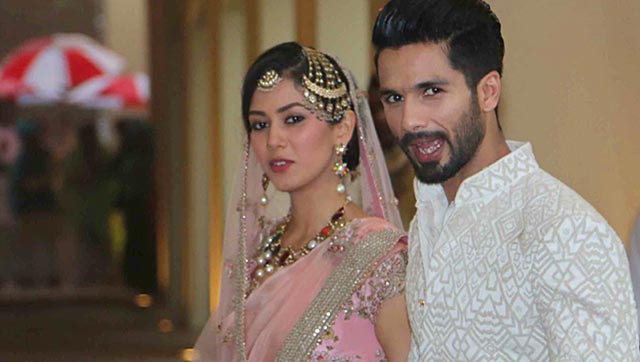 “Real life vivah of Bollywood actor Shahid Kapoor marries Mira Rajput”, First looks of the Wedding picture. Hello Guys, Good Afternoon. A breaking news for the female fans of shahid Kapoor’s. you may think what it is about?let me allow to know more about it. The most handsome hunk bachelor of Bollywood actor Shahid Kapoor got married his fiance Mira Rajput on July 7 in shivinder Singh farm house which is near to the outskirts of the capital.
Finally the wait is over for the family of Shahid Kapoor, when he married a Delhi based girl Mira Rajput, made officially Mr and Mrs Shahid kapoor. Checkout some of the picture of Shahid wedding’s.

Thought it was a heartbreaking news for the female fans of shahid’s, When the official announcement of shahid’s wedding came into media, on the other end fans was expecting a top level marriage, but unfortunately there was not so much kind of things, what was expected by the fans. Let check out some of the special moments of Shahid Kapoor’s weddings.

The marriage was very simple which is celebrated by only with 40 Guests, where they were some of his best friends and family. They wanted this wedding to a private ceremony and the venue was fully with high security where they placed some barricades near the bungalow on the road.

“Aise Bhabhi sabko mile” this words said by sanah to the media, who is shahid’s step-sister. Overall it was a very successful marriage where shahid steps in to his new life with Mira Rajput.