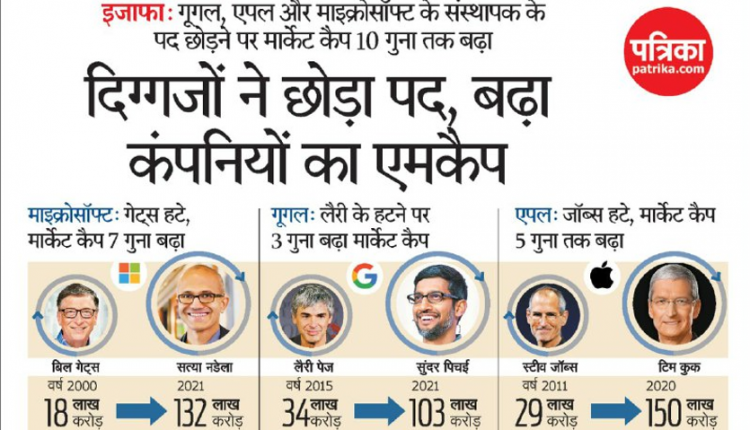 New Delhi. Jeff Bezos, the founder of e-commerce sector Amazon, is set to be relieved of the company’s CEO soon. In the next innings, he will take over as the executive chairman of the company. Bezos held this responsibility for nearly 30 years. He will be followed by Andy Jassi as the company’s CEO. Let us tell you, Bezos is the second richest person in the world with assets worth Rs 14.37 lakh crore. Any CEO and leaving the position of founder also definitely affects the company. However, it has been positive in the case of some of the world’s leading companies. The market cap of companies like Apple, Microsoft and Google has increased after the founder CEO stepped down. After leaving the post of CEO of Bezos, everyone will be watching the company’s performance. Microsoft: Bill Gates removed, market cap increased 8 times-
Bill Gates introduced Microsoft in April 1975. In January 2000, Gates stepped down as Microsoft’s CEO. He was replaced by Steve Balmer as the new CEO. 14 years later, Satya Nadella of Indian origin became the CEO of the company in place of Balmer. When Gates stepped down as CEO, Microsoft’s earnings at that time were Rs 42,395 crore. This increased to 1.34 lakh crores at the time of Balmer. The company’s market cap reached over $ 1 trillion during the Nadella era.

Google: Market cap increased 3-fold after Larry’s exit
Sergey Bin and Larry Page launched Google in 1998. Larry Page became the company’s CEO. He was succeeded by Eric Schmidt in 2001. In 2011, Page replaced Schmidt as CEO. In October 2015, the company’s structure was changed and Alphabet became the new company. It is the parent company of Google. Pages moved away from Google to become Alphabet’s CEO and Sundar Pichai became the new CEO of Google. In October 2015, Google’s market cap was $ 476.03 billion, which has increased to $ 1422.11 billion i.e. about one and a half trillion in February 2020.

I openly challenge Congress leaders, tell me where Mandi and MSP will be closed: Anurag Thakur in Rajya Sabha