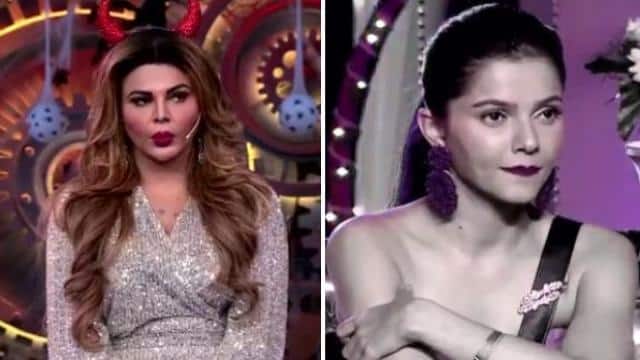 The makers of TV reality show ‘Bigg Boss 14’ have decided to give a new twist to this season. Actually, some old members in the show are going to join the race to win the Big Boss trophy by becoming contestants. It includes Rakhi Sawant, Kashmirira Shah, Vikas Gupta, Manu Punjabi, Arshi Khan and Rahul Mahajan. In the episode ‘Weekend Ka Vaar’, Rakhi Sawant, Rubina Dilac and Jasmine Bhasin will be seen fighting fiercely.

The finalists include Abhinav Shukla, Ejaz Khan, Rubina Dilac and Jasmine Bhasin, but the entry of the old contestants will give a new twist to the game. Salman Khan gives a reality check task to Kashmirira Shah, Rakhi Sawant and Vikat Gupta, in which they all appear to attack the finalists.

In the ‘misunderstanding balloons’ task, Kashmiri, Vikas and Rakhi will tell the members inside the house how they are playing a useless game inside the show. Rubina and Jasmine’s friendship has now turned into enmity. In such a situation, Rakhi Sawant taunts both of them and says that Rubina you are a ‘don’ of the house and Jasmine only makes you cry. With this, Rakhi challenges everyone that now the game will actually begin.

Ishita Dutta gave advice on marriage, said- Talk, understand and give each other space