Big relief to Gail and Oil India, will not be taken 2.3 lakh crore AGR Dues 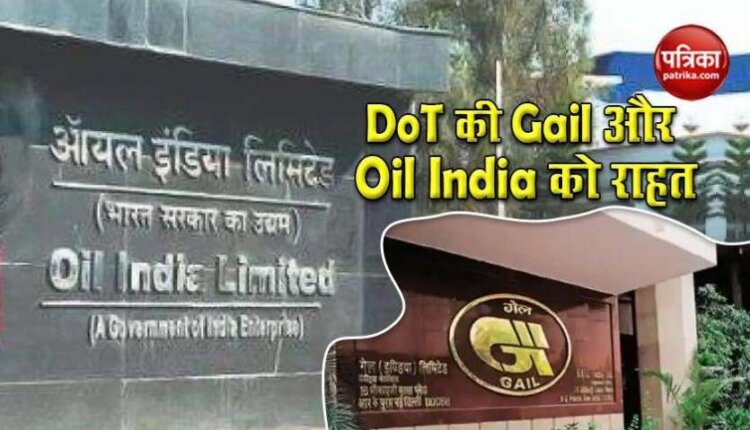 new Delhi. Oil India Limited and Gail India have received the biggest relief. The Department of Telecom has withdrawn the AGR notice given to both of them. Both the companies included in the government PSUs owed AGR Rs 2.3 lakh crore. Out of which GAIL was to pay 1.83 lakh crores and Oil India Rs 48,489 crores, but the Supreme Court had fiercely looted the telecom department during the hearing in the AGR case. Under which the court said that its decision has been misinterpreted by the department. Its decision was for private companies. PSU companies were not named by the government. After this decision, shares of oil companies have seen a big jump in the stock market.

Notice withdrawn after Supreme decision
The Supreme Court had said during the hearing in the case that seeking AGR dues from non-telecom companies is completely wrong. At the same time, he had also said earlier that the department and the government had not informed the court about these companies before. He also sent notices to Oil India and GAIL when the Supreme Court ordered AGR to be paid immediately, after which he took refuge in the Supreme Court. Now, according to the letter written by Oil Department on July 13, the matter of withdrawal of notice has been written. Now neither Tel India nor Gail India have any debt from the Telecom Department.

Oil companies share surge
After this news, the stock market saw tremendous boom in the oil sector today. Today the oil sector closed up by 639 points. On the other hand, the shares of Bharat Petroleum Corporation saw a rise of about 13 percent. This is the biggest boom in BPCL in 15 years. On the other hand, ONGC shares saw a gain of 6 per cent. Apart from this, GAIL India shares gained 4.24 per cent to close at Rs 101 per share.

Things have started improving, the FMCG sector saw a boom in the month of June

Manasi Singh Sep 30, 2020
Bollywood actress Kangana Ranaut is an inspiration for many girls belonging to the small town. From facts related…