Assam police made changes in the poster of Prabhas’ film, due to Corona, the mask was applied on both faces 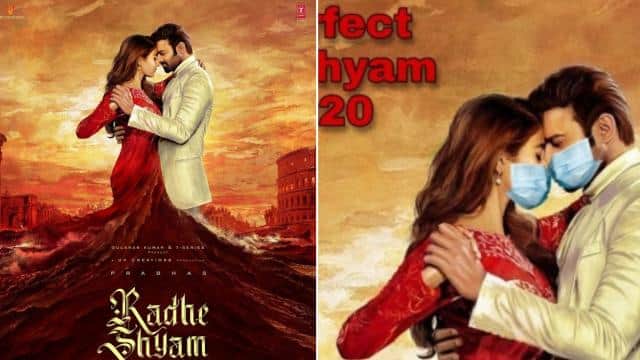 The first look of Superstar Prabhas’ film has been released recently. The film’s look is becoming viral on social media as soon as it is released. But the Assam Police has made some changes to this post and shared it. In this poster shared by Assam Police, you will see that they have edited and put masks on the faces of both the stars.

Actually, the Assam Police has given a corona twist in the poster. Sharing this poster, he wrote, ‘Tell your loved ones to apply masks whenever they are out. We tried to call Prabhas, but were unsuccessful. Now sending messages via Photoshop ‘.

Ask your loved ones to put Mask whenever they are out.
We tried calling Prabhas but failed.
Now sending the message through photoshop.@TSeries @UV_Creations @hegdepooja @director_radhaa @assampolice#RadheShyam # Prabhas20 pic.twitter.com/WNyOSzklVC

In this film, apart from Prabhas, Pooja Hegde, Bhagyashree, Murali Sharma, Sachin Khedekar, Priyadarshi, Sasha Chhetri, Kunal Roy Kapoor and Sathyan will be seen in important roles in this film. Director Radha Krishna is directing. The film is produced by Bhushan Kumar, Vamsi and Pramod.

The film is being produced by T Series with UV Creations. The film has been in discussion for the last two years and will be released in Hindi Tamil, Telugu and Malayalam.

Talking about Prabhas’s work front, he was seen in the last film Saaho. Shraddha Kapoor was in the lead role in the film and the film earned a bang at the box office.

Senior Citizen Savings Scheme: Savings scheme for senior citizens, will get the highest interest, know how to apply

Schemes for Women Entrepreneurs: Women get loans up to 25 lakhs without guarantee, know how