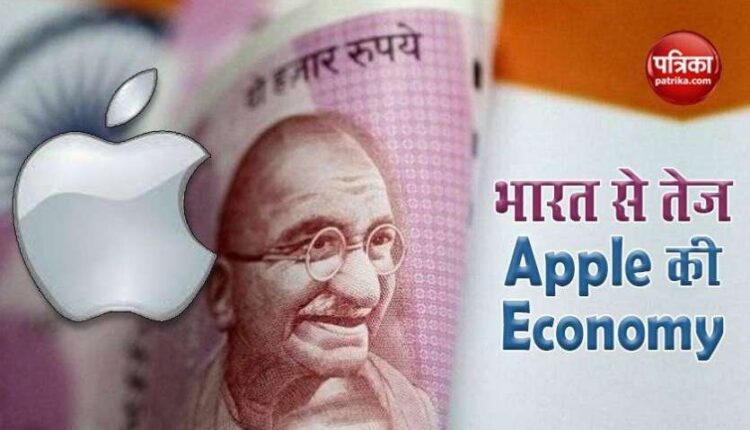 new Delhi. India is considered to be the world’s fastest running economy. Not only the leader of India but all the economic agencies of the world also say the same. There has definitely been a loss in the Corona era. Which shocked PM Narendra Modi’s dream, which he had seen in January 2018 and said in an address to the entire nation at an event, to make the country a 5 trillion dollar economy by 2025, After this, all the ministers of the country have been praising the same. On the other hand, a smartphone maker of the world is constantly moving forward, beating the pace of Indian economy. The American company Apple has become a 2 trillion dollar company. The special thing is that when PM Modi talked about the 5 trillison economy, Apple was not even a trillion dollar economy. Today India has not even reached 3 trillion and Apple has reached the mark of two trillion. If this continues, Apple will become an economy of 5 trillion before India. India’s position in two years
At the same time, if we talk about India’s economy, nothing special has been seen in the last two years. 2018 GDP was 2.71 trillion dollars. Whereas in 2019 India’s GDP showed slight increase and the figure stopped at $ 2.85 trillion. At the same time, talking about India’s potential GDP, it has been estimated at $ 3.20 trillion. Well this figure was estimated before the corona virus came into the world. With the effect of Corona virus, the country’s GDP is also expected to be less. Many economic agencies have expressed concern about the country’s GDP. According to experts, India’s GDP should not reach 3 trillion by the end of FY 2020. There is also a possibility that it may fall below the GDP of 2019. So will Apple become an economy of 5 trillion?
Now the question is, will Apple’s market reach 5 trillion or even by 2025? Looking at the growth, there is no doubt that Apple’s market cap can reach $ 4 trillion. According to experts, it is very difficult to tell about the company for the next five years. There is no doubt that the company is continuously growing. At the same time, there is also a possibility that by 2025 the possible price of company shares will be around $ 700, but at that time the US dollar will also depend on the index at which level it is.