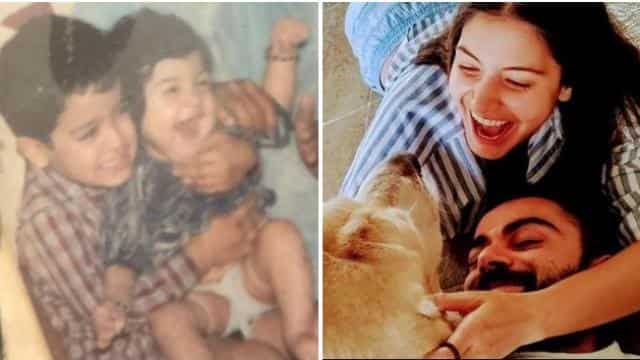 Bollywood actress Anushka Sharma has been away from films for a long time. Recently he has produced the web series, titled ‘Patal Lok’. There is a lot of craze for this web series among the fans on social media. Nowadays due to the lockdown, she is spending time with husband and captain of Indian cricket team Virat Kohli.

Anushka Sharma is very active on social media. Recently, she has shared a childhood photo of her, in which she is seen laughing while sitting on the lap of brother Carnesh Sharma. This photo of Anushka is becoming quite viral on social media. People are very fond of this picture of Anushka. In the caption, Anushka has created a heart emoji, while brother Carnesh writes that at that time I looked very lean to you.

The wedding sketch went viral earlier
The web series ‘Patal Lok’, produced by Anushka, has been released. In such a situation, Anushka shared a photo of her while watching ‘Patal Lok’. Anushka shared this photo and wrote, ‘Everybody of the world is watching Hades.’ This photo of Anushka was well liked on social media. But, the fans also saw something else in the photo. Actually, in this photo, TV has sketch of Anushka and Virat’s wedding which is quite funny. Fans had a great laugh seeing both of them on the sketch.

Never thought I would spend so much time with Anushka: Virat Kohli
Indian team captain Virat Kohli said that the lockdown implemented due to Kovid-19 has given him an opportunity to spend time with his wife Anushka Sharma. Kohli is often on tour with the cricket team. However, Kovid-19 gave both of them an opportunity to spend as much time as possible. All cricket tournaments have been postponed or canceled due to the Corona virus. Due to this epidemic, cricketers and Bollywood celebrities are also spending time at home.

Virat said, ‘We have known each other for a long time and to be honest, we never spent such a long time together. Usually I stay on tour and Anushka works. I go to meet him. And, if she is working in Mumbai, I stay at home those days. ‘

VIDEO: Tiger Shroff is afraid of this one thing, said- I close my eyes whenever I try