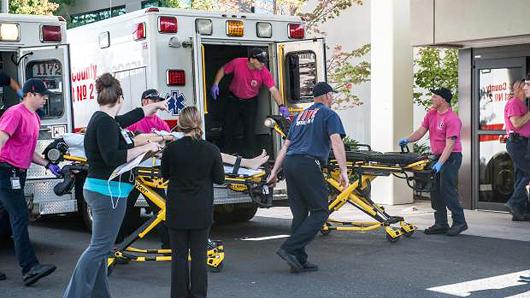 Another deadly mass shooting incident was reported at the Umpqua Community College in
Oregon in the US on Thursday which killed nine people and injured seven. The gunman, who
has been identified as 26-year-old Chris Harper Mercer, died at the end in a gunfire battle with
the police officials.

Mercer entered the college’s premises with the intention of shooting while the students were
in the classes. The statements recorded from the victims reveal that Mercer’s was targeting the
Christians.

Sharing the details of the unfortunate happening with the leading agency CNN, Anastasia
Boylan said that the shooter entered the classroom and immediately started firing which killed
their teacher.

As the scared students tried to escape by bowing down, he asked the students who were
Christians to stand up. “And they would stand up and he said, ‘Good, because you’re a
Christian, you’re going to see God in just about one second’,” narrated by Boylan’s father to
CNN.

Though nothing has been clear if Mercer was the student of the college, his name was seen as
an assistant with the production in a play staged there. The neighbour of Mercer revealed that
he preferred staying aloof from the people and was always spotted in his balcony in sheer
darkness. He has been living in the Winchester community from a few years.

According to Mercer’s sister, he was born in England and travelled to the US when he was
young. His father, who lives in Tarzana, has called it to be a “shocking incident”.

Mass shooting incidents have been quite common in the US. While expressing grief over the
incident during a press briefing, President Barack Obama said, “So tonight, as those of us who
are lucky enough to hug our kids a little closer are thinking about the families who aren’t so
fortunate. I’d ask the American people to think about how they can get our government to
change these laws, and to save these lives and let these people grow up.”