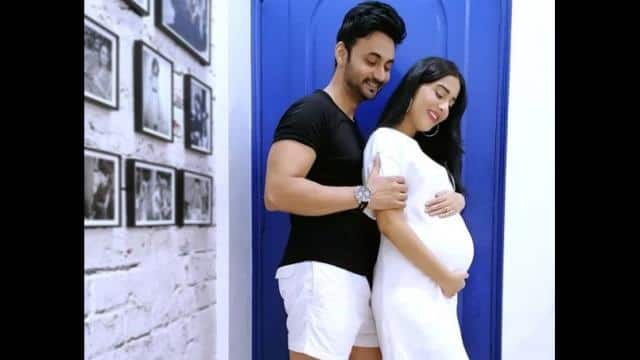 Bollywood actress Amrita Rao is having a pregnancy period. She is pregnant for nine months, which Amrita has given to fans by sharing the post. Also told that the little guest is going to come to his house this month or next month. Amrita Rao shared a photo on Instagram with husband RJ Anmol, in which she is seen flaunting baby bump.

Sharing the photo, Amrita Rao writes, “For you guys this is the 10th month and for us it is the ninth month. Surprise Surprise, Anmol and I are in the ninth month of pregnancy period. I am quite excited with sharing this news with fans. Thank you friends I am sorry that I had tucked it in my belly for so long, but it is true baby is coming soon. For me and Anmol’s family, this is an exciting journey. Thank you Universe, thank you all. Keep giving us your prayers like this. “

Let me tell you that Amrita Rao was recently spotted outside a clinic in Khar with her husband Anmol. During this, a photo of Amrita was also revealed, in which her baby bump was clearly visible. After this, Amrita’s pregnancy was confirmed. A source from the Times of India had said, “Amrita is enjoying this time of her life very much. Most people are not aware of his pregnancy. Only those close to the couple know about this. She was pregnant before the lockdown and is quite happy. Both Amrita and Anmol live their lives very privately. “

Let us tell you that Amrita and Anmol got married in 2016 after dating each other for seven years. His marriage was attended by family and only close friends.

Talking about Amrita’s professional life, she made her Bollywood debut with the film ‘Ab Ke Baras’. The film was released in the year 2002. In the film, he worked with Arya Babbar. Apart from this, Amrita has worked in many South films. Amrita Rao and Shahid Kapoor’s chemistry in ‘Ishq-Vishk’ and ‘Vivah’ was well received.

Significantly, Amrita was last seen in Balasaheb Thackeray’s biopic. In this film, he played the role of Bal Thackeray’s wife Meena Thackeray. In the film, he shared the screen with Nawazuddin Siddiqui. His performance in this film was well appreciated.

National Pension Scheme: Double benefit from investment in this government scheme, chance to get up to 12% return in 1 year