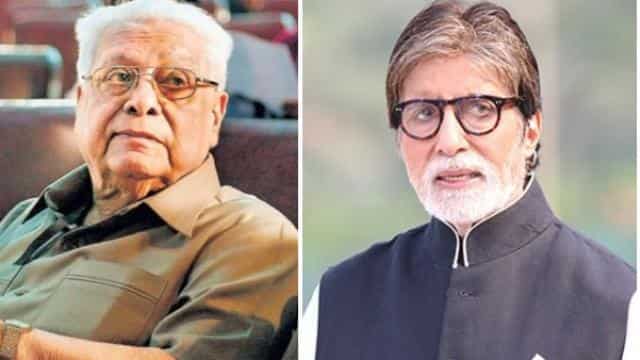 Basu Chatterjee, one of the great filmmakers of Hindi cinema, has passed away. He was 93. The filmmaker died due to age related ailments. Filmmaker Ashok Pandit has given the news of Basu Chatterjee’s death by tweeting. He is known for directing films such as ‘Chhoti Baat’, ‘Rajinigandha’, ‘Baat Baat Mein’, ‘Ek Rukta Hua Decay’ and ‘Chameli Ki Shaadi’. Bollywood stars are mourning the death of Basu Chatterjee. Remembering the special director, Amitabh Bachchan expressed his grief and described him as a wonderful person.

According to Amitabh, his films have a glimpse of the medium of India. He wrote in the tweet, “Prayers and condolences on Basu Chatterjee’s death .. A quiet, soft-spoken, gentle human .. His films depict the life of Central India .. Z MANZIL with him .. A sad loss .. .. These lines are often remembered for ‘rim jhim gire sawan’.

T 3552 – Prayers and Condolences on the passing of Basu Chatterjee .. a quiet, soft spoken, gentle human .. his films reflected the lives of middle India .. did ‘MANZIL’ with him .. a sad loss .. 🙏
.. in these climes often remembered for ‘rim jhim gire saawan’

Ashok Pandit said, ‘I am very sorry to inform you that Legendary film-maker Basu Chatterjee has passed away. His funeral will be performed today (June 4) at 2 pm in Santa Cruz. This is a big loss for the industry. We will miss you

I am extremely grieved to inform you all of the demise of Legendary Filmmaker #BasuChatterjee ji. His last rites will be performed today at Santacruz West (Opp Police station) crematorium at 3 pm.

Considering a great loss to the industry. Will miss you sir. #RIPBasuChaterjee pic.twitter.com/2Jlu3AqdVX

Bollywood’s famous producer and director Madhur Bhandarkar tweeted, “Very sad to hear the news of the demise of producer Mr. Basu Chatterjee. He will always be remembered for lighthearted comedy and simplest films. # om Shanti’

Sad to hear the demise of Veteran Filmmaker Shri.Basu Chatterjee. Will be always remembered for his Light Hearted comedies & Simplistic Films. #OmShanti 4 pic.twitter.com/YllOjtP4U5