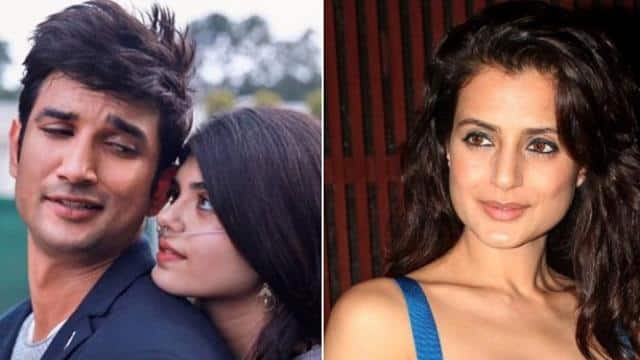 Amisha Patel, who made headlines due to the most expensive web series ‘Seventh Sense’ shot in Dubai, says that she was very sad when she saw Sushant Singh Rajput’s film Dil Bechara and she also cried. Amisha said that I do not like seeing Dil Poor because Sushant dies in it. He said that I still think he went nowhere. Amisha said that an artist never dies, he is always alive among his loved ones.

Apart from this, while talking about Bollywood movie mafia and nepotism, he said that outsiders should get a chance because they do not get a chance to prove themselves again and again. If one of his films does not work, then it is difficult for him to find work again. Asked why he did not have films today even after giving successful films in the early stages of his career in Bollywood, he said that I had given super hits like Gadar and Hamraj in the beginning of my career, so his Whenever I got a film, it was not so big.

However, after that I got busy with the works of my production house because I had put a lot in it and I had to watch every small and big work of his. Let us tell you that Amisha is going to leave for Dubai soon for the web series ‘Seventh Sense’ of Gaurang Doshi Production. It is accompanied by many artists like Prateik Babbar and R Madhavan, Ronit Roy. In this regard, he says that there is a fear in the mind to start shooting after months, but there is also excitement that now life is going to happen again like before. I was getting offers from many web shows but I wanted to do something different and secondly I was avoiding bold scenes or even intimate scenes. So when Gaurang told about ‘Seventh Sense’, I said yes.

Ankita Lokhande came forward to give justice to Sushant, so this director said- Keep in mind, now those people will chase you

Gaurang and I have always wanted to work with each other in films but this was not possible till now. But now I have a chance. I am very happy to start the web series with my good friend and better producer. Gaurang has always been known for shooting Bollywood films on a large canvas. I am confident that this time too, he will not leave any stone unturned in digital entertainment.

Chinese company could not withstand a month’s protest against India, it was sold out