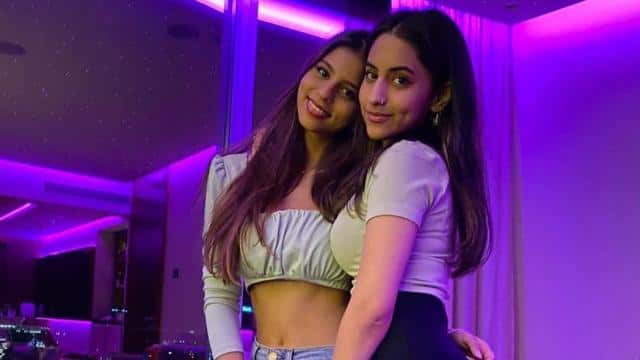 Shahrukh Khan’s daughter Suhana has returned to New York for her studies after living in Mumbai and Dubai at break due to Kovid-19. Suhana studies at New York University’s Tisk School of the Arts. Meanwhile, Suhana’s cousin Alia Chiba has shared an old photo of her with Suhana.

Sharing her two photos with Suhana, Alia wrote, “Follow disco ball.” In the photo, both sisters are seen posing for the camera. Suhana is wearing a crop top with jeans in it, while Alia is seen in black clothes.

Suhana has a lot of fan following on Instagram. Suhana used to share her photos on social media even during the epidemic. Recently, she also posted a mirror selfie after arriving in New York.

In this photo, she is seen wearing a zebra pattern top. The style of the color of his nails in the photo is attracting people. The ring finger nails are painted in different style from their nails seen in the picture, while the rest of the nails are painted black. Reactions of a lot of people have been seen on this photo. These include Abhi Bachchan’s granddaughter Navya, actor Elli Avram, actor Maheep Kapoor.

Apart from this, Suhana has also shared the ‘Boomerang’ of her university library and New York streets in another post.

It is not that Suhana only shares glamorous pictures of herself. It has also happened many times that he has also given his views on matters of public interest. Like he wrote about color and race. Sharing a picture of himself and Suhana told how he has had to deal with it in his growing age.

Suhana wrote, “There is a lot going on right now and this is one of the issues that we need to fix. It is not just about me, it is about every young girl / boy who has to suffer from inferiority complex without any reason. Here are some comments about my color and texture. When I was 12 years old I was described by full grown men and women as ugly due to my skin tone. It is very sad that we are all Indians, we all are saved by ourselves. Yes, we are born in different colors, but it does not matter. We are all humans. “

Buy TV, fridge and washing machine within four days, this is going to be expensive

Nigar Khan posted a photo and said to the sister- Happy marriage, Gauhar Khan’s reaction will win the heart