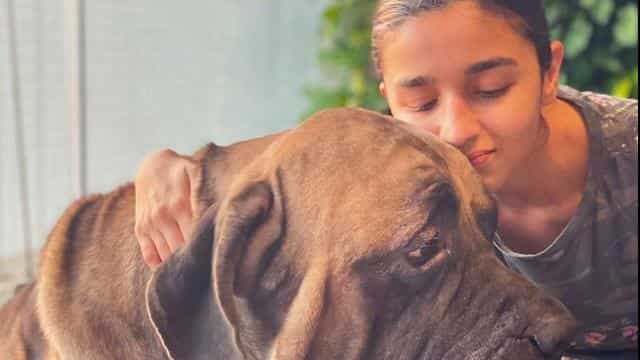 These days Alia Bhatt is spending a lot of time with Ranbir Kapoor and her family. Recently, Alia along with her whole family came to meet Ranbir’s family. Everyone spent quality time together. Photos during this time were shared by Ranbir’s sister Riddhima Kapoor, which became quite viral on social media.

Now Alia has shared some photos in which she is spending time with Ranbir’s Dog Lionel. While sharing photos with Lionel, Alia wrote, ‘They make many things better’.

Let me tell you that this is not the first time Aaliya has shared photos with Lionel. Even before this, she has been seen spending time with Lionel.

By the way, not only Alia, but her sister Shaheen Bhatt has also shared a photo with Ranbir’s dog.

Alia wanted to marry Ranbir before her relationship with Ranbir

Recently, an old video of Alia was going viral in which she is talking about marriage with Ranbir. Please tell that this video is from when Alia and Ranbir were not in the relationship.

Alia once appeared in Karan Johar’s show opposite Parineeti Chopra. Alia had told Karan during this time, ‘I remember my first meeting with Ranbir. You introduced me to him and said that this is Ranbir. I spoke a lot to Ranbir at that time. I kept talking to him without stopping and Ranbir kept telling me – very good Alia. I met Ranbir several times after that. He is very cute. I want to marry him. ‘