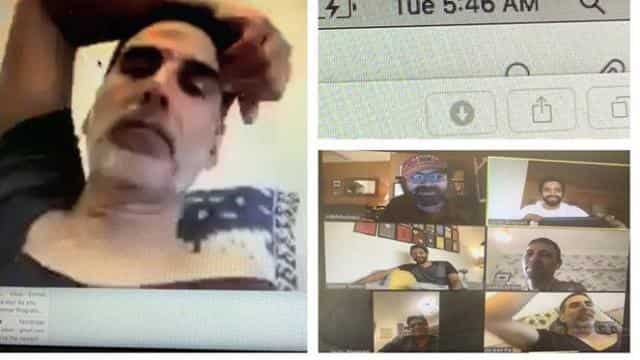 People’s daily routines have changed due to the lockdown caused by the Corona virus, but it has nothing to do with actor Akshay Kumar. He is walking in this phase with his habit of getting up early in the morning. Not only this, Akshay Kumar is also listening to the script of his films in the morning. Akshay discussed the script through video conferencing with the team of his upcoming film ‘Bell Bottom’ at 5:46 am. The video meeting was attended by director Ranjit M Tiwari, writer Aseem Arora, and Nimarta Vasu Bhagnani, Jackie Bhagnani and Nikhil Advani.

Sharing the screenshot of the video chat, Nikhil wrote, “Nothing changed of Akshay Kumar in lockdown. After all, the script of ‘Bell Bottom’ was discussed at 5:46 am.” Jackie Bhagnani also shared the screenshot on Twitter.

Thankful and grateful for every opportunity that comes my way! 4

Which challenge is Diya Mirza completing by making a red dot on her palm?

Recently Akshay shot an awareness campaign for the Indian government in association with film producer R Balki, all government guidelines have been followed during this shoot.

My definition of a perfect morning. The final #BellBottom narration with @akshaykumar Sir What a fab script @ranjit_tiwari @aseem_arora. We are all set – haina @nikkhiladvani. Dad @vashubhagnani we have never had a 6am meeting together! 4 @honeybhagnani @madhubhojwani pic.twitter.com/g57MYvkQbR