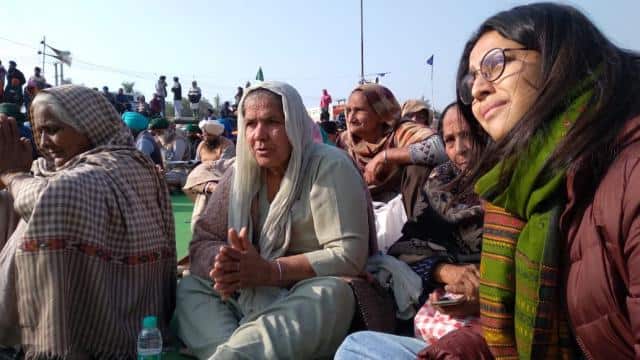 In the last two weeks, many celebrities have descended in support of farmers agitating against the new agricultural laws. Punjabi stars like Diljit Dosanjh and Gurdas Maan had recently arrived among the farmers who were performing at the Singhu border in Delhi. Now actress Swara Bhaskar has also reached the Singhu border to support the farmers. Swara Bhaskar has also shared her pictures of sitting on a dharna with farmers on social media. Earlier, stars like Priyanka Chopra, Sonam Kapoor, Taapsee Pannu, Richa Chadha, Sonu Sood and Hansal Mehta also supported the farmers. However, all these stars had justified the farmers’ demands through posts on social media. But Swara Bhaskar decided to go to these different dharna sites only.

Swara Bhaskar, an open opinion on political issues, recently slammed actress Kangana Ranaut for her comments on the peasant movement. Swara Bhaskar, who joined the movement, has written the Singhu Border and Kisan Movement in the caption along with the photographs. Along with this, he wrote, ‘I got a chance to see the resolve of farmers and elders.’ Before Swara Bhaskar, stars like Gurdas Maan and Diljit Dosanjh also reached the farmers’ movement. Not only this, Diljit Dosanjh, who came to support the movement, also announced to donate 1 crore rupees for arranging the protesters.

Supporting the farmers, Diljit had said in the movement, “The only demand from our government is to accept the farmers’ words. Everyone is sitting here peacefully and the whole country was with the farmers. ‘ Let me tell you that there was a sharp clash between Diljit Dosanjh and Kangana Ranaut on this issue.

A humbling day, to see the grit, resolve and determination of protesting farmers and the elderly at #SinghuBorder #FarmersProtests pic.twitter.com/WIGg6bdqkF

In fact, Kangana Ranaut tweeted an elderly woman as Shaheen Bagh’s grandmother. She also deleted this tweet, but she was surrounded by controversy by then. Diljit Dosanjh attacked Kangana Ranaut on this tweet and said that one should think before speaking anything. In response to this, Kangana Ranaut had even called him Karan Johar’s pet.

Biggest recovery in the history of stock market after 12 years, Sensex rises 90%

Now PAN card will be made in just 10 minutes from home, follow these easy procedures