After buying companies like Netmeds, Reliance now competes directly with Amazon and Flipkart 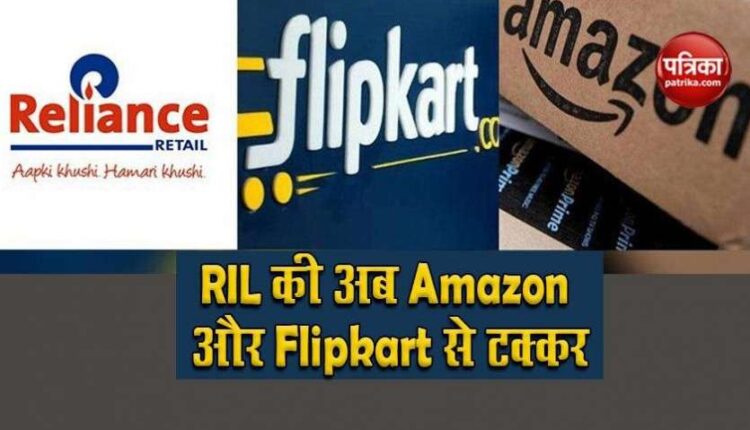 new Delhi. Reliance Industries’ entry into the retail sector, especially in the e-retail sector, has been the most alarming bell for Amazon India and Flipkart. Buying RRVL Buy Netmeds is a recent example. At the same time, under Reliance Jiomart, the company is currently busy finalizing deals with many more companies. If Reliance Future Group Deal is done, then Reliance will be easy to leave behind Amazon and Flipkart. Flipkart is backed by Walmart, one of the world’s largest retail companies. At the same time, Amazon World is the company of the world’s richest person Jeff Bezos. In such a situation, it will not be easy for Reliance to fight with both companies. Why companies like Airtel, Idea and Vodafone were in front of Reliance Jio, this time the competition is with the global leaders of retail sector.

Also read: After Netmeds, which companies are now eyeing Reliance

Whose partnership in e-retail or commerce
According to media reports, Flipkart has the highest share of the e-commerce sector or e-retail in the country. Its market share is around 60 percent. While Amazon’s stake is around 30 per cent. Now you can understand which big companies are going to compete with Geomart. In September, from October to October 4, the gross merchandise value of 3 billion was estimated at $ 3 billion i.e. 19 thousand crores. While the overall business was estimated to be around $ 4.8 billion i.e. 35 thousand crore rupees. In such a situation, there are chances of increasing it in 2020 and in the coming years.

Reliance Retail’s entry will shock
If you talk about Reliance Retail, it has 10,415 stores in more than 6600 cities across the country. Which has 500 million annual footfalls. On the other hand, Reliance has launched a new app for retail food and grocery. Which has been beta tested. According to the India Brand Equity Foundation, the arrival of 4G and then 5G smartphones is expected to increase the number of consumers. India’s e-commerce market is expected to be $ 200 billion by 2026. At the same time, as digital transformation of all things is being seen in India, by 2021 the Internet user in the country can grow to 829 million.

E-commerce policy will also shock
The special thing is that a new e-commerce policy has also come into force in the country. In such a situation, it will take some time to adapt Amazon and Flipkart in line with the new policy. Whereas Geomart and Reliance Retail Market will operate on the same policy from day one. Which will cause him no trouble. At the same time, the presence of growers, bigbasket and other grocery companies is expected to affect both companies in the coming time.

Also read: After the US Stimulus Package, a big drop in Gold and Silver price, know how much the price

Reliance was doing the deal
RIL is also looking to acquire several companies to strengthen its hold in the retail sector. According to experts, work is underway to buy a stake in furniture outlet Urban Ladder, Lanjari brand Jivame. According to reports, Reliance may pay $ 160 million for Jivame, while the Urban Ladder deal could be for $ 30 million. Apart from this, there is a discussion that Reliance can also buy milk delivery company MilkBasket.

The biggest deal can happen with Future Group
Both Amazon and Flipkart companies will also be eyeing Reliance and Future Group deals. According to experts, RIL is also planning to acquire all or part of the retail assets of Kishore Biyani’s Future Group. This deal can be about 23 thousand crores. The last round of negotiations between the two companies is going on. If people are to be believed, then the deal between the two companies may be finalized soon. If the deal between the two is final, then both Amazon and Flipkart will cause big trouble in India. Because then Mukesh Ambani will become the largest retail business in the country.