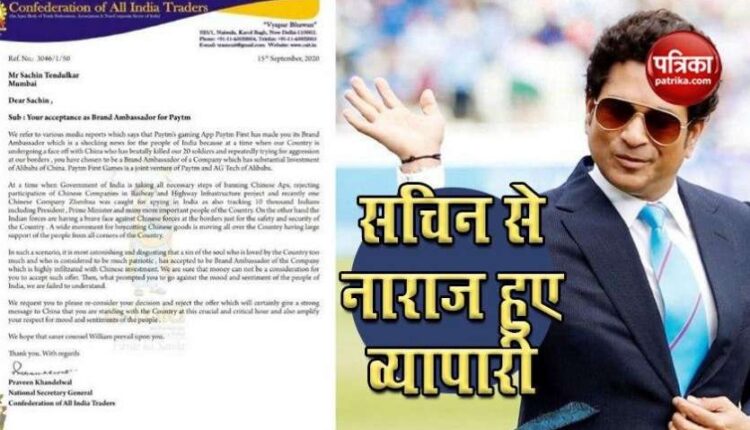 new Delhi. Cricketer Sachin Tendulkar gets big Chinese investment company Paytm Taking a dig at being the brand ambassador of First Games, the Confederation of All India Traders said that in the current extraordinary circumstances when India is having a kind of cold war with China, Sachin will have no major Chinese investment company. Becoming a brand ambassador clearly shows his longing to earn more and more money. CAT strongly criticized Sachin Tendulkar in this matter and further said that he should answer to the country whether money is big or country is big? At the same time, not only businessmen but fans are also very angry with this decision.

Varna Kat will perform against Sachin Tendulkar
Kat says that at the same time, we have sent a letter to Sachin Tendulkar, requesting him to change his decision. According to the organization, he will wait for his reply till Sunday, otherwise next week, a protest will be organized across the country against Sachin’s attitude on the issue. The organization says that he has given a lot of love to Sachin Tendulkar. In such a situation, they should not do any work that hurts the sentiments of the people of the country.

Also read: Happiest Minds Happy Investors As soon as they are listed in the stock market, know how much profit is made

Chinese companies are plotting against India
CAT’s National General Secretary Praveen Khandelwal said that on one hand a big sugar company in the country is being caught spying in India, about 10 thousand key people in the country including the President and Prime Minister are being constantly monitored by Chinese companies, which Explains China’s ill-intentions towards. On the other hand, Sachin Tendulkar, who calls himself the son of India, has no shame in becoming the brand ambassador of a China-invested company.

Sachin Tendulkar failed
Khandelwal said that celebrities appearing in advertisements are in a way role models for our youth. Our youth want to see these artists and imitate them. Want to be like them. Therefore, whoever is associated with social life, it is necessary to behave according to the highest criteria and Sachin Tendulkar has failed here.