630 flights canceled due to non-approval from many states, passengers had to return from the airport. 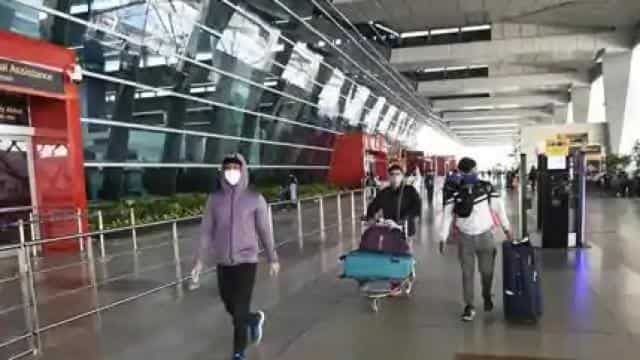 Domestic passenger airlines resumed on Monday after a two-month hiatus in the country amidst reluctance by various states to open their own airports in view of rising cases of corona virus. However, 630 flights were also canceled. Monday after the central government issued no flights to West Bengal and Andhra Pradesh on Sunday night and operating fewer numbers of flights to major cities like Mumbai, Chennai and Hyderabad, according to aviation sector sources. About 630 flights were canceled on.

Because of this, when many people arrived at the airport on Monday morning, they had to return after getting the information about the cancellation of their flight. Many people expressed their anger on social media about this. Union Civil Aviation Minister Hardeep Singh Puri said on Monday evening, there were no domestic flights till yesterday and today 39,231 passengers have reached their destinations with 532 flights. Flights have started again in the Indian skies. The number of passengers and flights will increase with the start of flights in Andhra Pradesh from tomorrow and in West Bengal from May 28.

According to sources, ticket booking for around 1,100 flights on Monday started from May 22. Under the strict regulation recommendation of civil aviation authorities, the first flight took off from Delhi airport to Pune at five in the morning while the first flight from Mumbai airport was diverted to Patna at quarter past seven. States like Maharashtra, West Bengal and Tamil Nadu, which are the busiest airports in the country, are not keen on starting domestic airlines from airports citing increased corona virus infection cases in their states.

West Bengal and Andhra Pradesh did not accept the request of the Civil Aviation Ministry to grant permission to start the airline. On Sunday, it was decided that operations at Kolkata and Bagdogra airports in West Bengal would be closed from 25 to 27 May and from May 28, 20-20 flights would operate from both places. At the same time, only 20 percent of flights will be operational from Vijayawada and Visakhapatnam airports in Andhra Pradesh before the lockdown from May 26.

50 domestic flights will be operated daily at Mumbai Airport and 30 domestic flights per day at Hyderabad Airport. A maximum of 25 aircraft will be able to land at Chennai Airport but no number of aircraft flying from there has been set. Wolfgang Prok Schauer, president and chief operating officer of IndiGo, arrived at the Delhi airport to witness the operations on the first day.

He said that the airline was operating smoothly and the passengers were feeling comfortable as there was less congestion on Monday. He said, we visited some boarding gates. The passengers were well aware of the rules. Despite the short time we got from central authorities and the states, we successfully conveyed the information. ”

20 thousand passengers traveled from Indigon
An IndiGo spokesperson said that about 20,000 passengers boarded the airline’s planes. In a press release, SpiceJet said that its first aircraft took off from Ahmedabad at 6.45 am on Monday and reached Delhi at 7.10 am. The company also said that it operated 20 aircraft on scheduled routes on Monday under the regional connectivity flight plan.

Protocol follow
SpiceJet Chairman and Managing Director Ajay Singh said, “We are happy to resume the airlines fully, smoothly and following the guidelines and protocols set by the government.” Airline companies were apprehensive about resuming services as many states have implemented separate terms and conditions to keep passengers arriving from domestic aircraft in separate residences.

Government announced last week
The government announced last week that domestic airlines would be resumed from May 25 under certain rules and guidelines. These included rules such as limiting ticket prices, wearing masks by passengers, not giving food inside the aircraft, and providing details of medical status by passengers via the Arogya Setu app or self-declaration form. Puts them in different colors according to their position and previous travel. This helps users to know if there is a corona infected person around them.

Corona positive, two staff members turned out to be home to Karan Johar, filmmaker himself confirms