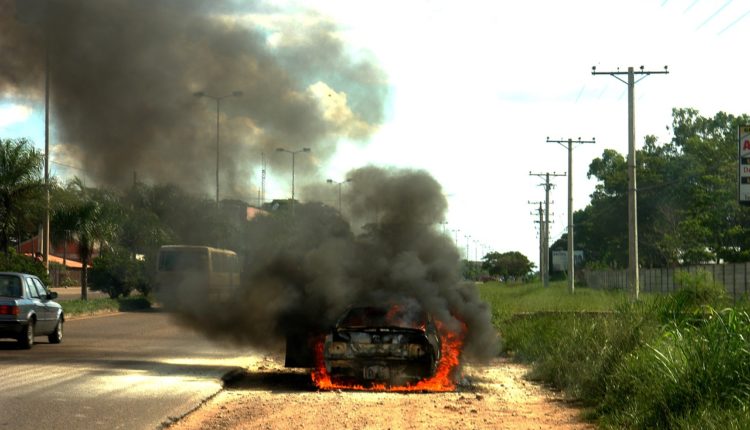 The Indian police put five suspects behind bars with connection to the attack made on a 21 year old Tanzanian girl by a furious mob. The attack, which has been found to be a result of revenge not only involved beating up of the girl and a couple of her male friends but also ripping her shirt off in public. Her car was also set on fire in Bangalore, after being mistaken for the car that was driven over an Indian woman.

John W Kijazi, Tanzanian High Commissioner has ensured that the Indian government provides improved security to all the African students who reside in the city. He reported to the CNN-IBN network of students saying, “They are really disappointed, frustrated and scared actually,”

The girl and her friends were wrongly identified as the Sudanese driver who ran over and killed an Indian woman and were hence attacked allegedly. The Tanzanian student placed a complaint at the police station on Wednesday saying that her car was stopped as it reached the scene of the accident after about half an hour and the mob began to charge at them. She added, “Our car was set ablaze. They tugged at my t-shirt and it tore, leaving me without anything. They continued to thrash us and we ran for our lives,” The statement given by her also reveals that a passer-by, who offered her his t-shirt was also beaten up and that when they climbed into a public transport bus, they were thrown out by the other passengers.

Sushma Swaraj, Indian Foreign minister admits that it is an act of shame and that it is high time that the foreigners are given justice. She also stated, “We are deeply pained over the shameful incident with a Tanzanian girl in Bengaluru,” in one of her tweets.

Based on the above orders, N S Megharikh, Police Commissioner, Bengaluru has arrested 5 suspects under the name of “road rage incident” rather than considering it to be racially motivated.

Such shameful incidents are not any new to occur in India as most of the foreign students have faced situations of the same sort during various circumstances. In this regard, commissioner Kijazi concluded that it needs a joint effort from both India and Africa to put an end to such incidents hereafter. He also mentioned, “We will only be satisfied when we see the results”.

The Tanzanian woman also mentioned in her complaint that a policeman had first refused to accept her statement and help her during the attack. She says, He told us ‘you all look alike and should get the black man who ran over a woman in the area’,”

Union Minister Rijiju also puts forward his opinion saying that it is indeed a shameful act by the Indians. He said to the reporters, “For 200 years, India was enslaved by foreigners. We have been fighting racial discrimination. But in India itself, if there is racial discrimination, the government will take it very seriously. We will not allow racial discrimination to take place in the country. This is a matter of shame for the entire nation,”