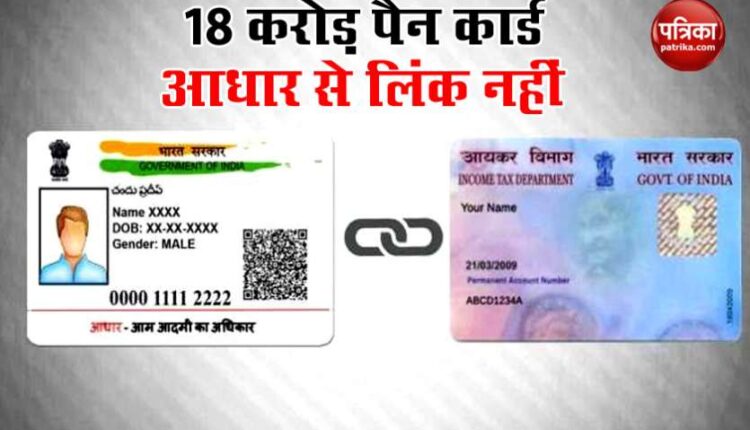 new Delhi. The plan to link PAN card to Aadhar card (PAN Aadhar Linking) has been continuously pushed forward. Even after that, the plan to link PAN Aadhar card in the country has not been completed. The special thing is that there are 18 crore PAN cards in the country that are not linked to the Aadhar Card. According to data released by My Government India, 31.71 crore PAN cards have been linked to Aadhaar cards in the country so far. While the number of PAN card holders in the country is more than 500 million. Whose number can be increased further. Let us also tell you how the figures have been released by the government.

Also read: This scheme of Bhai PM Modi to millions of people of the country, so many applications came in 41 days

18 crore PAN cards still left
According to information received from a tweet from My Government India, there are 18 crore PAN cards in the country, which are not linked to the Aadhaar card. According to the latest data, 32.71 crore permanent account numbers i.e. PAN cards have been added in the country so far. While the number of PAN card holders in the country till June 29 has been 50.95 crores. The government has already extended the date of linking Aadhaar with PAN to 31 March 2021. Let us tell you that Unique Identification Authority of India i.e. UIDAI issues 12-digit Aadhaar Card while Income Tax Department issues 10-digit PAN to someone, person or entity.

Number of returns filed
It has been clarified by the Income Tax Department that if the PAN card is not connected to Aadhaar, it will be closed. In such a situation, it is very important to have a link between the two. While giving information about the income distribution of those filing income tax returns, My Government India has said that 57% of the units are those whose income is less than Rs 2.5 lakh. At the same time, 18 percent of the returns are filled by people whose income is 2.5 to 5 lakh rupees. The income of 17 per cent people is between Rs 5 lakh and Rs 10 lakh. The income of seven per cent ranges from Rs 10 lakh to Rs 50 lakh. Only one percent of those who file income tax returns are those who show their income more than Rs 50 lakh.

Sushant’s sister folded her hands and said – If we do not know the truth, we will not live in peace.